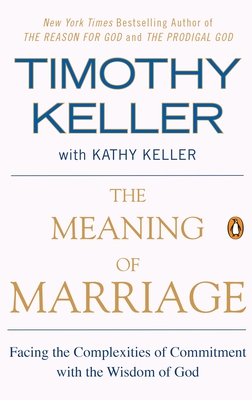 The Meaning of Marriage

Facing the Complexities of Commitment with the Wisdom of God

“Incredibly rich with wisdom and insight that will leave the reader, whether single or married, feeling uplifted.” —The Washington Times

Based on the acclaimed sermon series by New York Times bestselling author Timothy Keller, this book shows everyone—Christians, skeptics, singles, longtime married couples, and those about to be engaged—the vision of what marriage should be according to the Bible.

Modern culture would have you believe that everyone has a soul mate; that romance is the most important part of a successful marriage; that your spouse is there to help you realize your potential; that marriage does not mean forever, but merely for now; and that starting over after a divorce is the best solution to seemingly intractable marriage issues. But these modern-day assumptions are wrong. Timothy Keller, with insights from Kathy, his wife of thirty-seven years, shows marriage to be a glorious relationship that is also misunderstood and mysterious. The Meaning of Marriage offers instruction on how to have a successful marriage, and is essential reading for anyone who wants to know God and love more deeply in this life.

Praise For The Meaning of Marriage: Facing the Complexities of Commitment with the Wisdom of God…

"This is a book Christians need to read." —The Christian Post

"The rare marriage book I would heartily recommend to any single, no matter his or her age, whether dating, courting, engaged, or disinterested . . . Rich and practical." —The Gospel Coalition

"A brilliant new book that explains why marriage is in such dire straits, and how to rescue it." —BreakPoint

Timothy Keller was born and raised in Pennsylvania and educated at Bucknell University, Gordon-Conwell Theological Seminary, and Westminster Theological Seminary. His first pastorate was in Hopewell, Virginia. In 1989 he started Redeemer Presbyterian Church in New York City with his wife, Kathy, and their three sons. Today, Redeemer has nearly six thousand regular Sunday attendees and has helped to start more than three hundred new churches around the world. He is the author of The Songs of Jesus, Prayer, Encounters with Jesus, Walking with God Through Pain and Suffering, and Every Good Endeavor, among others, including the perennial bestsellers The Reason for God and The Prodigal God.

Kathy Keller grew up outside Pittsburgh, Pennsylvania, and attended Allegheny College, where she led Christian fellowship groups, before attending Gordon-Conwell Theological Seminary. She met Timothy Keller while studying there, and they were married at the beginning of their final semester. She received her MA in Theological Studies at Gordon-Conwell in 1975. Kathy and Tim then moved to Virginia, where Tim started at his first church, West Hopewell Presbyterian Church, and their three sons were born. After nine years, Kathy and her family moved to New York City to start the Redeemer Presbyterian Church.
Loading...
or support indie stores by buying on