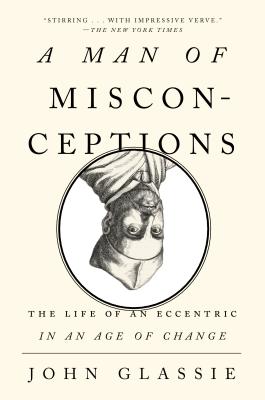 A Man of Misconceptions

The Life of an Eccentric in an Age of Change

The “fascinating” (The New Yorker) story of Athanasius Kircher, the eccentric scholar-inventor who was either a great genius or a crackpot . . . or a bit of both.

The interests of Athanasius Kircher, the legendary seventeenth-century priest-scientist, knew no bounds. From optics to music to magnetism to medicine, he offered up inventions and theories for everything, and they made him famous across Europe. His celebrated museum in Rome featured magic lanterns, speaking statues, the tail of a mermaid, and a brick from the Tower of Babel. Holy Roman Emperors were his patrons, popes were his friends, and in his spare time he collaborated with the Baroque master Bernini.

But Kircher lived during an era of radical transformation, in which the old approach to knowledge—what he called the “art of knowing”— was giving way to the scientific method and modern thought. A Man of Misconceptions traces the rise, success, and eventual fall of this fascinating character as he attempted to come to terms with a changing world.

With humor and insight, John Glassie returns Kircher to his rightful place as one of history’s most unforgettable figures.

Praise For A Man of Misconceptions: The Life of an Eccentric in an Age of Change…

“Like his subject, Athanasius Kircher, writer John Glassie has the rare gift of authentic quirkiness. A Man of Misconceptions leaves you contemplating the big questions, delightedly scratching your head, and laughing—all at the same time.”
—Mark Kurlansky, author of Cod and Salt

“I’ve been waiting my entire adult life for someone to write a popular biography of the loopy, ingenious scholar-priest Athanasius Kircher, and John Glassie has delivered marvelously. A man of insatiable curiosity and staggeringly diverse intellectual passions, Kircher may have been the greatest polymath of all time—or at least the most eccentric.”
—Joshua Foer, author of Moonwalking with Einstein

“Glassie brings the ultimate mad professor Athanasius Kircher vividly to life, revealing him to be a kind of cross between Leonardo da Vinci and Mr. Bean. A most entertaining foray into the history of science.”
—Ross King, author of Brunelleschi’s Dome

“A marvelous insight into the mind of one of the world’s most eccentric thinkers. Glassie brings Kircher to life—and what a life it is!”
—Adrian Tinniswood, author of The Verneys and Pirates of Barbary

“What a brilliant and revealing book about a fascinating character, one I had no previous knowledge about. Glassie’s genius is to make Kircher and his era come alive for us centuries later in such a way that I can hear and touch him.”

"This fascinating biography of the Renaissance polymath Athanasius Kircher explores the birth of modern science through the life of one of the last pre-modern geniuses."
—The New Yorker

“In his quirky biography of Athanasius Kircher … Mr. Glassie uses Kircher as something of a comic foil to show how erroneous ideas about investigating nature helped lead to modern science... [A] spirited telling."
—The Wall Street Journal

“You will come away from Glassie's book ... feeling inspired by the incredible inventive spirit of the man behind such creations as the ‘cat piano’ and ‘the speaking trumpet’ — and at the same time a bit sad that such characters as Kircher have been left mostly forgotten in the winds of time. You'll feel more knowledgeable about everything because of this book.”
— The Atlantic Wire

“Hooh boy! ... Why do I love Kircher so much? Chalk it up to the man’s passion for scientific inquiry, and his boundless curiosity about how the world works.”
— Scientific American

“Glassie’s biography ... brings into stark relief the pressures of the intellectual climate he lived in ... a time when witch trials flourished, prevailing logic said bees spontaneously generated from dung, and when it was widely believed that something called the vegetable lamb plant of Tartary produced actual sheep as its fruit.”
— The Daily Beast

"In the course of his life, Kircher opined, almost invariably incorrectly, about the nature of light, magnetism, and the geography of the earth…Glassie has a genuine affection for Kircher despite the latter's laughably bizarre theories and self-aggrandizing egotism. In fact, the author's affection humanizes Kircher, making him oddly credible."

“An entertaining reminder that skepticism can be good.”
—Library Journal

“excellent…An entertaining and enlightening biography of a man who has been, probably unfairly, almost entirely left out of the history of science.”
—Booklist

"What makes A Man of Misconceptions fascinating is how it sets the intellectual scene of the 17th century ... and it's that clarity of scene that helps make sense of a contradictory character."
—Mental Floss Magazine

John Glassie, a former contributing editor to The New York Times Magazine, has written for The Believer, The New Republic, The New York Times, The Paris Review Daily, Salon, and Wired. He is the author of the photo book Bicycles Locked to Poles and lives in Brooklyn, New York.
Loading...
or
Not Currently Available for Direct Purchase