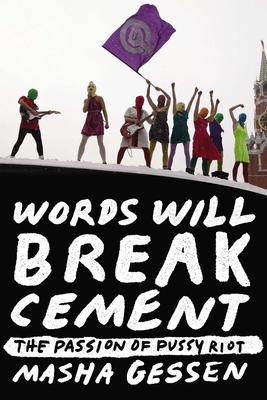 The Passion of Pussy Riot

From National Book Award winner Masha Gessen, the heroic story of Pussy Riot, who resurrected the power of truth in a society built on lies.

On February 21, 2012, five young women entered the Cathedral of Christ the Savior in Moscow. In neon-colored dresses, tights, and balaclavas, they performed a “punk prayer” beseeching the “Mother of God” to “get rid of Putin.” They were quickly shut down by security, and in the weeks and months that followed, three of the women were arrested and tried, and two were sentenced to a remote prison colony. But the incident captured international headlines, and footage of it went viral. People across the globe recognized not only a fierce act of political confrontation but also an inspired work of art that, in a time and place saturated with lies, found a new way to speak the truth.

Masha Gessen’s riveting account tells how such a phenomenon came about. Drawing on her exclusive, extensive access to the members of Pussy Riot and their families and associates, she reconstructs the fascinating personal journeys that transformed a group of young women into artists with a shared vision, gave them the courage and imagination to express it unforgettably, and endowed them with the strength to endure the devastating loneliness and isolation that have been the price of their triumph.

Praise For Words Will Break Cement: The Passion of Pussy Riot…

Praise for WORDS WILL BREAK CEMENT: THE PASSION OF PUSSY RIOT

Named a Best Book of 2014 by NPR  and The Guardian

“Urgent  … damning … Much here will be new to the American reader. All of it is infuriating.” –Alexander Nazaryan, The New York Times

“Remarkable…Masha Gessen [is] one of the most important activists and journalists Russia has known in a generation… disquieting, moving, and closely reported.” –David Remnick, The New Yorker

"Simply put, this is the best, most urgent book I've read about art this year. Through rigorous research and furiously fine storytelling, Masha Gessen places the band's founding members unflinchingly into context, revealing the worlds they move between (of Russian activists, intellectuals and prisoners) and reminding us that art really can change the world — if you're an artist with the guts to try." –NPR

“The fullest account so far of the Pussy Riot story… A moving object lesson in the power of art — perhaps especially messy and exuberant art — to rise above repression and have the last, cement-breaking word.” –Sara Marcus, Los Angeles Times

"Valuable for its insights into the modern cultural history of Russia, with all its idealistic muddles, dead-ends and false starts … ideal for those curious about the country behind the Games.”  –The Economist

“What makes someone into a dissident? Why do some people give up everything — home, family, job — to embark on a career of protest? … Gessen set out to answer this question … in this excellent short account.” –The Washington Post

“A compulsively readable book that explains in unflinching terms the tragedy that is modern Russia…Words Will Break Cement is an instant classic, destined to take its place with Solzhenitsyn’s writings about the Gulag... one comes away…marveling at the courage of the Pussy Riot members making a stand against tyranny while demonstrating the willingness to pay a steep price” –New York Journal of Books

“Riveting… [Gessen] is a sharp observer of people and events, and she tells Pussy Riot’s story in a lively style that is somehow casual, precise, and powerful all at once. She has written a terrific book, a compelling story of three creative women who courageously attacked a repressive regime by disrupting the spectacle of its propaganda.” –The Rumpus

"The significance of Words Will Break Cement...is its demonstration that Pussy Riot's rambunctious confrontations with the authorities are the result of several years of growing frustration with Putin's rule...The genius of Pussy Riot...has been to employ guerilla street theater and a sense of humor along with unbridled profanity–all the better to skewer the pretensions of power and privilege Putin insists are his due...Words Will Break Cement makes clear that Pussy Riot is more than just a small group of disorderly anarchists." –New York Times Book Review

“Masha Gessen’s history of founding Pussy Riot members Tolokonnikova, Maria Alyokhina, and Yekaterina Samutsevich provides some crucial context for understanding the motives and means of the group…Gessen’s account helpfully highlights the lineage of art and protest that gave rise to Pussy Riot.. Pussy Riot is what art endangered looks like; their songs are salvos; their hits are strikes.” ––Boston Globe

“[A] fascinating insider account … As Russia waves sabers at the Ukraine and considers a new cultural policy that explicitly rejects multiculturalism and tolerance, the young women of Pussy Riot increasingly seem not like radicals but prophets. … Vivid and empathic.” –Seattle Times

“A compelling and eloquent account of current events.” –The Christian Science Monitor

“Gessen offers a lively and sympathetic portrait of the three women at the center of the storm… keenly observed and often moving.” – The Guardian

“[An] angry, clear and intimate look at the women behind Pussy Riot.” – The Sunday Times

"Compelling and highly readable. It’s an artist biography, a meditation on revolutionary art and gender politics, an absurdist courtroom drama and defiant commentary on the cultural climate of Gessen’s homeland — a place for which the author obviously has enduring love and concern.” –Eugene Weekly

“Pussy Riot is a global cause célèbre, and now Gessen—prickly, frank, precise, and sharply witty—provides the first in-depth look at this story-in-progress”–Booklist (starred review)

"Based on interviews with Pussy Riot members (including those arrested and others in the group), their families, friends, and attorneys, Gessen puts their protest and arrests in the context of post-Soviet, Putin-era Russia’s culture and society… Recommended to readers in feminist studies, those following ­Putin’s Russia, and all who study protest art.” –Library Journal

Praise for THE MAN WITHOUT A FACE: THE UNLIKELY RISE OF VLADIMIR PUTIN

“Gessen has shown remarkable courage… [An] unflinching indictment of the most powerful man in Russia.” –The Wall Street Journal

“Illuminating… It is with [the] explosive revelations that Gessen truly excels… An electrifying read from what can only be described as an incredibly brave writer.” –Columbia Journalism Review

“Part psychological profile, part conspiracy study. As a Moscow native who has written perceptively for both Russian and Western publications, Gessen knows the cultures and pathologies of Russia… [and has] a delicious command of the English language… A fiercely independent journalist… Gessen’s armchair psychoanalysis of Putin is speculative. But it is a clever and sometimes convincing speculation, based on a close reading of Putin’s own inadvertently revealing accounts of his life, and on interviews with people who knew Putin before he mattered.” –The New York Times Book Review

Masha Gessen is a Russian-American journalist who is the author of several books, most recently the national bestseller The Man Without a Face: The Unlikely Rise of Vladimir Putin. Her work has appeared in Vanity Fair, The New York Times, Newsweek, Slate, and many other publications, and has received numerous awards, most recently the 2013 Media for Liberty Award. She has served as the editor of several publications and as director of Radio Liberty’s Russia Service. She lives in New York.