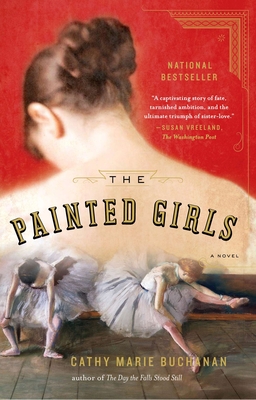 1878 Paris. Following their father’s sudden death, the van Goethem sisters find their lives upended. Without his wages, and with the small amount their laundress mother earns disappearing into the absinthe bottle, eviction from their lodgings seems imminent. With few options for work, Marie is dispatched to the Paris Opéra, where for a scant seventeen francs a week, she will be trained to enter the famous ballet. Her older sister, Antoinette, finds work as an extra in a stage adaptation of Émile Zola’s naturalist masterpiece L’Assommoir.

Marie throws herself into dance and is soon modeling in the studio of Edgar Degas, where her image will forever be immortalized as Little Dancer Aged Fourteen. There she meets a wealthy male patron of the ballet, but might the assistance he offers come with strings attached? Meanwhile Antoinette, derailed by her love for the dangerous Émile Abadie, must choose between honest labor and the more profitable avenues open to a young woman of the Parisian demimonde.

Set at a moment of profound artistic, cultural, and societal change, The Painted Girls is a tale of two remarkable sisters rendered uniquely vulnerable to the darker impulses of “civilized society.” In the end, each will come to realize that her salvation, if not survival, lies with the other.

Praise For The Painted Girls: A Novel…

"A captivating story of fate, tarnished ambition, and the ultimate triumph of sister-love." --The Washington Post

"Deeply moving and inventive... Buchanan's evocative portrait of nineteenth-century Paris brings to life its sights, sounds, and smells, along with the ballet hall where dancers hunger for a place in the corps... But nothing is more real or gripping than the emotions of Marie and her older sister Antoinette... Their tale is ultimately a tribute to the beauty of sisterly love." --People

"The ethereal ballerina from Degas's famed sculpture Little Dancer Aged Fourteen comes to life in this richly imagined novel. Amid the glamour of tutus and art emerges a surprisingly gritty story of survival in the gutter of Belle Epoque Paris." --Entertainment Weekly

Cathy Marie Buchanan is the author of the national bestseller The Day the Falls Stood Still, a Barnes & Noble Recommends selection and an Indie Next pick. She lives in Toronto.

If I had a bit of nerve, I would tell him I want to look pretty instead of worn out. I want to be dancing instead of resting my aching bones. I want to be on the stage, like a real ballet girl, instead of in the practice room, even if it is not yet true. Marie thinks this while pondering the paintings in Degas’s workshop. What kind of art is Degas interested in making? Why are his innovations so important for the history of art? Do you see empathy or hostility toward the dancers in his artworks?

“Tonight, roasted chicken in your belly,” Maman says, loosening her arms, stepping back from me. “And always, an angel in your heart.” Marie’s mother often reminds her that the spirit of Marie the First, her older sister who died in infancy, is with her. How is Marie affected by her namesake? Why, at the end of the book, does she tell the old man at the tavern her name is Marie the First?

Is Marie deluding herself in believing her hatred of Émile is justified? Once she sees he cannot be guilty of the second murder, is it fair for her to destroy the alibi provided by the calendar? To what extent is she looking after her own best interests when she burns it?

Sometimes I wonder, though, if for the very best ballet girls, the trickery is not a little bit real, if a girl born into squalor cannot find true grace in ballet. Marie thinks this while looking at her fellow ballet dancers on the Opéra stage. Does Marie experience true grace while dancing? Without the ballet can Marie be fully content?

Antoinette was too bold in speaking her mind to end up with her legs spread open for a slumming gentleman. Marie ponders this misconception after a posing naked with her knees parted on Monsieur Lefebrve’s sofa. What leads her to such an idea? Are such misconceptions common among sisters?

Émile consistently mistreats Antoinette. He forces himself upon her, and then tells her it’s her fault; he allows Pierre Gille to slap her, and then abandons her for him. Is Antoinette’s blind love for Émile realistic? Of all his wrongdoings, why is it a lie that finally makes her see the light?

In what instances does Antoinette’s bold temperament hinder her? When does it serve her well?

“Both are beasts. The physiognomies tell us . . . those two murderers are marked.” Degas says this to Marie after Émile is declared guilty of a murder she knows he did not commit. Why does Degas feel it is fair to judge the boys’ characters based on the way they look? What are some other moments in the book when people are judged based on appearance?

“No social being is less protected than the young Parisian girl—by laws, regulations, and social customs.” —Le Figaro, 1880. Why did Buchanan choose this quotation as the book’s epigraph? How does it relate to the story? In what ways are the van Goethem sisters unprotected?

I want to put my face in my hands, to bawl, for me, for Antoinette, for all the women of Paris, for the burden of having what men desire, for the heaviness of knowing it is ours to give, that with our flesh we make our way in the world. Marie thinks this while waiting to see Antoinette at Saint–Lazare. Is she correct in such thinking? To what extent does the sentiment hold true today?

What role does honesty play in this book? Do you support Antoinette’s decision to tell “one last lie” to Marie, the lie about Émile’s guilt? Does she go overboard with her refusal to tell even white lies by the end of the book?

Have you seen Little Dancer? What were your impressions? Have they changed after reading The Painted Girls? How?

Will you recommend The Painted Girls to a friend? A sister? Why?