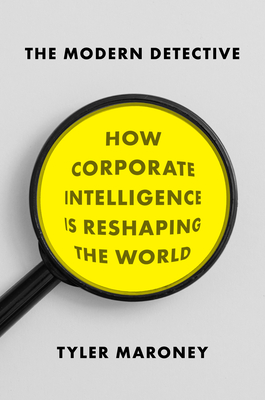 How Corporate Intelligence Is Reshaping the World

A fascinating examination of the world of private investigators by a 21st-century private eye.

Today's world is complicated: companies are becoming more powerful than nations, the lines between public and corporate institutions grow murkier, and the internet is shredding our privacy. To combat these onslaughts, people everywhere -- rich and not so rich, in business and in their personal lives -- are turning away from traditional police, lawyers, and government regulators toward a new champion: the private investigator.

As a private investigator, Tyler Maroney has traveled the globe, overseeing sensitive investigations and untying complicated cases for a wide array of clients. In his new book, he shows that it's private eyes who today are being called upon to catch corrupt politicians, track down international embezzlers, and mine reams of data to reveal which CEOs are lying. The tools Maroney and other private investigators use are a mix of the traditional and the cutting edge, from old phone records to computer forensics to solid (and often inspired) street-level investigative work. The most useful assets private investigators have, Maroney has found, are their resourcefulness and their creativity.

Each of the investigations Maroney explores in this book highlights an individual case and the people involved in it, and in each account he explains how the transgressors were caught and what lessons can be learned from it. Whether the clients are a Middle Eastern billionaire whose employees stole millions from him, the director of a private equity firm wanting a background check on a potential hire (a known convicted felon), or creditors of a wealthy American investor trying to recoup their money after he fled the country to avoid bankruptcy, all of them hired private investigators to solve problems the authorities either can't or won't touch. In an era when it's both easier and more difficult than ever to disappear after a crime is committed, it's the modern detective people are turning to for help, for revenge, and for justice.

Praise For The Modern Detective: How Corporate Intelligence Is Reshaping the World…

“It is part memoir, part how-to guide, a celebration of the analytical and interpersonal intelligence that makes a great investigator….It takes nothing away from Maroney’s fascinating account to say that the gap between the profession’s noblest aspirations and its customary activities is a subject worth investigating.” —The New Yorker

“A thorough insider’s guide to the indispensable but often little-known role private detectives play in ensuring the transparency of international business, government institutions, and legal systems. … Maroney manages to shatter the myths without destroying the fun.” —Pursuit Magazine

“Using his superb reporting and writing skills, journalist-turned-gumshoe Tyler Maroney has produced one of the best books to take us behind the scenes into the fascinating world of private investigation. I found The Modern Detective riveting.” —William Cohan, bestselling author of The Last Tycoons and House of Cards

"A modern-day shamus, Tyler Maroney operates as a one of the good guys in an industry of shady operators who hack, pretext, and impersonate others to get their information. Taking us from Mombasa to Beirut, into a prison and then into the hard drive of a hedge fund's computer, Maroney explains how he operates as a principled intelligence gatherer, ferreting out corruption and even serving the public good. His tale is a how-to for dogged and ethical sleuthing. It's also a hell of a lot of fun." —Jesse Eisinger, author of The Chickenshit Club: Why the Justice Department Fails to Prosecute Executives

“Tyler Maroney takes the reader behind the scenes with the largely unknown investigators and researchers who work to make a difference around the world. This book is a must-read for those seeking to understand how this growing professional class holds government officials accountable, advances factual reporting, and exposes corporate wrongdoing.” —Daniel J. Jones, former lead investigator for the Senate Intelligence Committee and founder of Advance Democracy, Inc.

“Former journalist turned PI Tyler Maroney’s new book should be the Bible for those who want to be private investigators and for those who want to find out precisely what it is that private investigators can find out. The book is part memoir, part how-to, and entirely engrossing.” —Bethany McLean, contributing editor at Vanity Fair and author of The Smartest Guys in the Room, All The Devils Are Here, and Saudi America

Tyler Maroney is the cofounder of the private investigations firm Quest Research & Investigations, and has worked at Kroll Associates and Mintz Group. His investigations have been featured in documentaries on HBO and Amazon Prime Video and have been profiled in Esquire, Rolling Stone, and Fast Company. Before becoming an investigator, he was a Fulbright scholar and worked as a journalist. His work has appeared on Frontline and Cheddar TV and in The Wall Street Journal, The New York Times, and Fortune. He lives in Brooklyn.
Loading...
or support indie stores by buying on