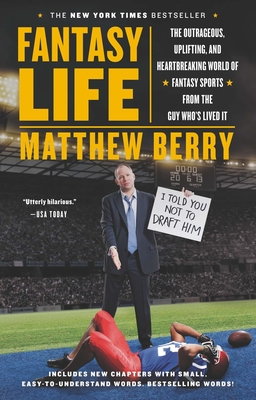 The Outrageous, Uplifting, and Heartbreaking World of Fantasy Sports from the Guy Who's Lived It

Fantasy football, fantasy baseball, fantasy basketball, even fantasy sumo wrestling: the world of fantasy sports is huge, and still growing. Today, more than 35 million people in the United States and Canada spend hours upon hours each week on their fantasy sports teams. And as the Senior Fantasy Sports Analyst for ESPN, Matthew Berry is on the front lines of what has grown from a niche subculture into a national pastime.

Written with the same award-winning style that has made Berry one of the most popular columnists on ESPN.com, Fantasy Life is a book for both hard-core fantasy players and people who have never played before. Between tales of love and hate, birth and death, tattoos and furry animal costumes, the White House Situation Room and a 126-pound golden pelican, Matthew chronicles his journey from a fourteen-year-old fantasy player to the face of fantasy sports for the largest sports media company in the world.

Fantasy will save your life. Fantasy will set you free. And fantasy life is most definitely better than real life. You’ll see.

Praise For Fantasy Life: The Outrageous, Uplifting, and Heartbreaking World of Fantasy Sports from the Guy Who's Lived It…

"An utterly hilarious romp through a wacky, yet occasionally poignant universe that runs parallel to reality – as told by someone who's struggled to find his way in both...If you're already one of the 36 million who do play, the book will make you laugh out loud, pump your fist in agreement and shake your head in sympathy. If you don't play, this book is a great way to find out what all the fuss is about." - USA Today

"As a longtime fan of Matthew Berry, I'm happy he's finally collected the most inane and hilarious things people will do in pursuit of fantasy glory. If I was in a fantasy league where you drafted people who write about fantasy leagues I would draft Matthew first.  Also, I would need to make some major changes in my life." - Seth Meyers, Saturday Night Live Head Writer and three-time fantasy champion in a league you don't care about

“You don’t have to play fantasy sports to enjoy Matthew Berry’s Fantasy Life. You don’t even need to be a sports fan. If you like great writing, if you appreciate irreverent humor, if stories about friendship, family, backstabbing, and regrettable Justin Bieber tattoos warm your heart, you’ll love this book.”—Harlan Coben, #1 New York Times bestselling author

“I am a bad fantasy football player and worse fantasy baseballer. I am heartened after reading Fantasy Life that this apparently does not matter. Matthew Berry’s book proves that there are lots of people out there like us: people who don't use fantasy sports to escape from life, but rather to live it with more fun.”— Peter King, Senior Writer, Sports Illustrated, and owner, “Montclair Pedroias,” New Jersey Suburban League

"I don't care about fantasy sports, and unless it involves a player shooting another player on the field like in The Last Boy Scout, I don't want to hear any stupid fantasy stories. But Matthew Berry did the impossible: He wrote a book about fantasy football that was hilarious and interesting to people who don't even like fantasy football. I loved this book."  - Tucker Max, #1 New York Times bestselling author of I Hope They Serve Beer in Hell

“Football can be broken down into X’s and O’s, but at the end of the day, we’re all after drama, human interest, and a great story. Matthew Berry’s Fantasy Life is a great story. I know sports can make a difference in people’s lives; Matthew Berry has shown that fantasy sports can, too.” – Ron “Jaws” Jaworski, ESPN NFL Analyst, and proud owner of multiple fantasy championships under the name "Jawbreaker"

"If I had to choose between playing real football and fantasy football, I honestly don’t know what I’d choose. (Just kidding.) For players like me, fantasy sports are an obsession, an escape, and a great opportunity to trash talk each other. Matthew Berry is THE guy (other than me) everyone listens to and texts for advice during drafts. Fantasy Life is a must-read for fantasy sports fans, athletes, and anyone who loves ridiculous stories" Maurice Jones-Drew, All Pro NFL running back, host of "Running with MJD" on SiriusXM Fantasy Sports Radio

“For those of us who compete in fantasy sports, it's a fraternity. And this book IS fantasy sports. It covers the highs and lows, the good and bad, in victory and in defeat. And it's told by the only man who could tell it: Matthew Berry, the Talented Mr. Roto himself.”- Dale Earnhardt, Jr., NASCAR driver and 12-team "Dirty Mo Posse" league champion.

“I was excited to see that Matthew was writing a book about fantasy sports. As a pro athlete I’ve seen fantasy sports blow up in the last 10 years, and he’s been in the middle of all of it. Thank you, Matthew Berry, for writing such a funny book – and for being my personal consultant for the Cardinals’ fantasy football league.” -Matt Holliday, All-Star Outfielder, St. Louis Cardinals

“Matthew Berry has gleefully documented everything that is so great about fantasy sports - the celebrations and the punishments, the conniving and backstabbing, the agony and the ecstasy.  He’s got an amazing story for any situation you find yourself in.  It’s the Kama Sutra of fantasy. If you've ever watched The League, you will love this book.  Matthew shows in hilarious fashion that fantasy is like life - just better.” - Jackie and Jeff Schaffer, Creators of The League

“One of the people who makes it so much easier for you to enjoy success in fantasy sports now explains why we all enjoy playing fantasy sports. Draft this book early in your first round.” – Keith Olbermann, four-time New York Times bestselling author, nine-time fantasy baseball pennant winner

"Matthew Berry's personal journey in fantasy football is a lesson in a reality of life. Now, you can separate fantasy from reality in a fascinating read." - Chris Mortensen, ESPN Senior NFL Insider and "always in the money!"

“Is there anyone that still thinks fantasy-baseball players are some sort of niche, Trekkie sect? Countless Major League players admit themselves to playing the game, and the web hasn't only mainstreamed it, it has turned it into a multi-million-dollar business. At this point, we'd say more sports fans know who Matthew Berry is than know most of the players on his team.”
-New York Magazine

Universally regarded as one of the leading voices on fantasy sports, Matthew Berry is ESPN’s Senior Fantasy Sports Analyst. Known as the “Talented Mr. Roto,” he’s an Emmy winner for his work on ESPN2’s Fantasy Football Now. As one of the most popular columnists and podcasters on ESPN.com, he appears regularly on ESPN television and radio shows, including Sunday NFL Countdown, SportsCenter, and NFL Live. He is one of only four people to be in the Hall of Fame of both the Fantasy Sports Trade Association and the Fantasy Sports Writers Association.
Loading...
or support indie stores by buying on