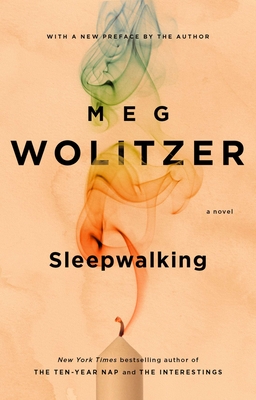 The debut novel from the New York Times–bestselling author of The Interestings and The Female Persuasion, a story of three college students’ shared fascination with poetry and death, and how one of them must face difficult truths in order to leave her obsession behind.

Published when she was only twenty-three and written while she was a student at Brown, Sleepwalking marks the beginning of Meg Wolitzer’s acclaimed career.  Filled with her usual wisdom, compassion and insight, Sleepwalking tells the story of the three notorious “death girls,” so called on the Swarthmore campus because they dress in black and are each absorbed in the work and suicide of a different poet: Sylvia Plath, Anne Sexton, and Wolitzer’s creation Lucy Asher, a gifted writer who drowned herself at twenty-four.  At night the death girls gather in a candlelit room to read their heroines’ work aloud.

But an affair with Julian, an upperclassman, pushes sensitive , struggling Claire Danziger—she of the Lucy Asher obsession-–to consider to what degree her “death girl” identity is really who she is.  As she grapples with her feelings for Julian, her own understanding of herself and her past begins to shift uncomfortably and even disturbingly. Finally, Claire takes drastic measures to confront the facts about herself that she has been avoiding for years.

“Wolitzer’s gift is being able to sense the tragicomic aspects of both childhood and adulthood and to describe them to us in a voice that is always lucid, insightful and, most of all, tempered with the hard-won wisdom of compassion.”— The New York Times Book Review

“Wolitzer is as precise and rigorous an observer of social status as Tom Wolfe; she is as incisive and pitiless and clear-eyed a chronicler of female-male tandems as Philip Roth or John Updike. . . . She writes about life at eye level. . . . Wolitzer is terrific at depicting the ambiguity of modern family life, its murky choices and thorny dilemmas.”—Chicago Tribune

“All of Wolitzer’s characters are so articulate and insightful that it’s a pleasure to listen to them think. . . . [Her] scenes are intensely observed and nuanced.”—The Atlantic

Meg Wolitzer is the New York Times bestselling author of The Interestings, The Uncoupling, The Ten-Year Nap, The Position, The Wife, and Sleepwalking. She is also the author of the young adult novel, Belzhar. Wolitzer lives in New York City.
Loading...
or support indie stores by buying on
(This book is on backorder)