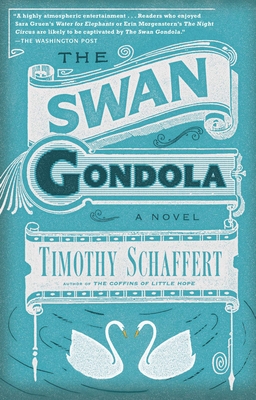 For readers of Water for Elephants or The Night Circus, a lush and thrilling romantic fable about two lovers set against the scandalous burlesques, midnight séances, and aerial ballets of the 1898 Omaha World’s Fair.

On the eve of the World’s Fair, Ferret Skerritt, ventriloquist by trade, con man by birth, is unsure how the fair’s events will change him or his city. Omaha still has the marks of a filthy Wild West town, even as it attempts to achieve the grandeur and respectability of nearby Chicago. But when he crosses paths with the beautiful and enigmatic Cecily, his purpose shifts, and the fair becomes the backdrop to their love affair.

One of a traveling troupe of actors that has descended on the city, Cecily works in the Midway’s Chamber of Horrors, where she loses her head hourly on a guillotine, playing Marie Antoinette. And after closing, she rushes off, clinging protectively to a mysterious carpetbag, never giving Ferret a second glance. But a moonlit ride on the swan gondola, a boat on the lagoon of the New White City, transforms everything when the fair’s magic begins to take its effect.

Praise For The Swan Gondola: A Novel…

"In his fifth book, Timothy Schaffert has crafted one of the best novels you’ll read all year. At times gently funny, at times melodramatic, The Swan Gondola sweeps readers up into its considerable charms and does not relinquish them until the final paragraph."—Miami Herald

"Timothy Schaffert has chosen the 1898 World’s Fair in Omaha as the backdrop for his new novel, The Swan Gondola, a highly atmospheric entertainment, full of plot twists, historical flavor and paranormal romance. . . . Beneath the intrigue, mystery and historical window dressings of The Swan Gondola beats the heart of a complicated love story. . . . As a prose stylist, Schaffert leans toward the extravagant without crossing the line into purple. The jaunty Victorian temperament of the prose rings true to the era, as do its thoroughness and attention to detail. . . . This tendency toward expansive description . . . serves to create a palpable atmosphere, imbuing the novel with the glossy cinematic quality of a big-budget Hollywood period piece. . . . Readers who enjoyed Sara Gruen’s Water for Elephants or Erin Morgenstern’s The Night Circus are likely to be captivated by The Swan Gondola."—The Washington Post

"A ventriloquist falls for a Marie Antoinette impersonator at the 1898 Omaha World's Fair. The backdrop for his pursuit—aerialist acts, midnight séances—only adds charm to this mythical slice of Americana."—Good Housekeeping

"Set during the 1898 Omaha World's Fair, this novel recreates the few months that Nebraska served as an international capital, complete with lavish temporary palaces and a cast of cynical hucksters, pickpockets and performers who earn their living on the midway. Though the historical details about the fair's construction delight . . . it's the love story of a certain ventriloquist named Ferret Skerritt and an actress named Cecily that captivates, most especially when a wealthy rival to Ferret threatens to separate the two. Be prepared for a romantic finish—and some unexpected twists in the plot that prove magic is possible, even for magicians."—Oprah.com

"“The Swan Gondola” is loud and colorful and larger-than-life. But throughout, Schaffert proves he knows how to find the quiet heart of a scene, of which none are better than the tender moments between August and Ferret, full of the love of friendship and the pain of one-sided romance."—Kansas City Star

"I am a hopeless romantic. And if you’re like me, Timothy Schaffert’s The Swan Gondola may just be the perfect book for you. . . . [It is] a believable, touching and occasionally maddening tale of love, loss, and life afterward. . . . Schaffert’s characters come across as so vivid that I found myself wishing, almost to the point of believing, that Ferret Skerritt were real, if for no other reason than to prove that magic was at one time genuine."—Wichita Eagle

"A ventriloquist in a hot air balloon lifts off from Omaha, Neb., crashes in a strange land, and presides over an emerald cathedral. Yes, it’s The Wizard of Oz. But it’s also the loose construct of Timothy Schaffert’s new novel, The Swan Gondola, which pays tribute to the L. Frank Baum’s classic, yet veers off on its own path of magic and deception. It’s an entertaining and thoroughly researched book, particularly suitable for Americana buffs who want a taste of life in a western frontier town struggling to become a modern city at the turn of the century."—St. Louis Post Dispatch

"Offering an expertly conjured atmosphere complete with soothsayers, cure-all tonics, technologicalgadgetry, and daring high-wire acts, Schaffert’s whimsical epic of illusion and reality at the 1898 Omaha World’s Fair promises and delivers grand entertainment. . . .  Audiences will be lured in by the offbeat personalities and carried along by the unexpected plot developments, but the real showstopper is the exuberant Gilded Age setting, imagined in elaborate detail. With so many wondrous attractions, this finely spun world feels almost dreamlike, yet Schaffert also takes a sharp look at what’s most important in life."—Booklist (starred review)

"The Swan Gondola will no doubt garner comparisons to Water for Elephants and The Night Circus, and fans of such historical romances will not be disappointed. There’s plenty of magic to go around in this good, old-fashioned love story."—Bookpage

“Schaffert’s picture of the fair is enchanting, from the buildings that shimmer with ‘shattered glass that had been dusted over the whitewash’ to the midway attractions, including a theatre where Cecily and Ferret briefly hang from wires and dance in midair. . . . There are many romantic and historical delights here. . . It’s easy to imagine this charming novel attaining Water for Elephants–like popularity with readers.”—Publishers Weekly

"With allusions to the Emerald City in The Wizard of Oz, Schaffert has magically transformed a stretch of field near Omaha into a white, shimmering vision of rotundas, columns, and pillars."—Library Journal

“The Omaha World’s Fair of 1898 comes to gritty, yet magical life in this enchanting new novel, a mystical tale of love, loss and spiritual reincarnation.”—Melanie Benjamin, New York Times–bestselling author of The Aviator’s Wife

“A fresh, gorgeous, witty page-turner full of twists and surprises and all the romance in the world. I couldn't put it down.”—Jami Attenberg, New York Times–bestselling author of The Middlesteins

“The Swan Gondola is a highly imaginative, vividly told tale of whimsy, hucksters, soothsayers, ghosts and, most of all, star-crossed lovers.”—Cathy Marie Buchanan, bestselling author of The Painted Girls

“Every page of The Swan Gondola shimmers with exquisite detail. Timothy Schaffert has brought a whole universe to life. Reading it, the magic of the day comes alive, complete with seers and balloons, with corsets and lipstick, love letters and the ventriloquism of romance.”—Emma Straub, author of Laura Lamott’s Life in Pictures

“A highly atmospheric entertainment, full of plot twists, historical flavor, and paranormal romance.…Readers who enjoyed Sara Gruen’s Water for Elephants or Erin Morgenstern’s The Night Circus are likely to be captivated by The Swan Gondola.” —The Washington Post

“I am a hopeless romantic. And if you’re like me, [this book] may just be the perfect book for you.…I found myself wishing, almost to the point of believing, that Ferret Skerritt were real, if for no other reason than to prove that magic was at one time genuine.” —Wichita Eagle

“A ventriloquist in a hot air balloon lifts off from Omaha, Neb., crashes in a strange land, and presides over an emerald cathedral. Yes, it’s The Wizard of Oz. But it’s also the loose construct of The Swan Gondola, which pays tribute to L. Frank Baum’s classic, yet veers off on its own path of magic and deception. An entertaining and thoroughly researched book.” —St. Louis Post-Dispatch

Timothy Schaffert grew up on a farm in Nebraska and now lives in Omaha. He is the author of four previous novels. Schaffert teaches creative writing and literature at the University of Nebraska–Lincoln.
Loading...
or
Not Currently Available for Direct Purchase