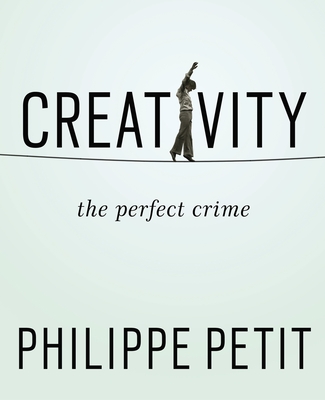 In the vein of The Creative Habit and The Artist’s Way, a manifesto on the creative process from a master of the impossible.

Since well before his epic (and illegal) 1974 walk between the Twin Towers of the World Trade Center, Philippe Petit had become an artist who answered first to the demands of his craft—and not just on the high wire, but also as a magician, street juggler, visual artist, builder, and writer. He was a rebel and an autodidact, cultivating the attitudes, resources, and techniques to tackle even seemingly impossible feats. His outlaw sensibility spawned a unique approach to the creative process—an approach he shares, with characteristic enthusiasm, irreverence, and originality, in Creativity: The Perfect Crime.

With the reader as his accomplice, Petit reveals fresh and unconventional ways of going about the artistic endeavor, from generating and shaping ideas to practicing, problem-solving, and ultimately pulling off the “coup” itself—executing a finished work. His strategies and insights will resonate with performers of every stripe (actors, musicians, dancers), practitioners of the non-performing arts (writers, artists), professionals in search of new ways of meeting challenges, and individuals simply engaged in the art of living creatively.

Praise For Creativity: The Perfect Crime…

Praise for Creativity: The Perfect Crime

“Gleeful… Anyone involved in the performing arts will find Creativity useful. [A] kaleidoscopic manifesto …. as richly insightful as it is vaingloriously irreverent. Read it. Use it to cross whatever tightropes you happen to be perched on.” – Minneapolis Star Tribune

“Anyone curious about Petit’s life and art, or hoping to draw inspiration for their own creative coup, will find ideas and insights in Creativity: The Perfect Crime.” --BookPage

"Like all extraordinary artists, Philippe Petit's practice is founded in rigor, scrutiny, and dedication. What sets Philippe in a class all his own is his restless quest to conquer the greatest physical heights, achieving a precise balance of chaos and creativity. He is an inspiration to all who dare to dream of the seemingly impossible. Dear friend: I salute you!”
--Mikhail Baryshnikov

“A book as unique, open and inspiring as one would expect from its fundamentally revolutionary creator, a true original who does not accept accepted wisdom or take no for an answer. As I read, I kept underlining and thinking of friends I wanted to share it with---actors, writers, directors, anyone really. This book could be as powerful for kids as adults; I put a copy of it on each of my kids' nightstands and recommend you do the same.”
--David Duchovny

“If life itself is a walk on a wire, suspended between birth and death, in Creativity: The Perfect Crime Philippe Petit reminds us that the humble precision of every little step can lead to greatness.”
--Francesco Clemente

“I enjoyed the organization of chaos, the boldness of ideas, the insanity of Philippe’s visions, the extreme discipline of planning, and the passion of the feat. It inspires to create not only on a sound concept, but also on a whim or a spark.  I was thoroughly able to identify with his highs and lows and it was a great pleasure to have one so freewheeling put his methods down in a completely personal way."
--Julie Taymor

“Philippe Petit created one of the greatest works of art of the twentieth century.  He is also a most intelligent and original thinker (not to mention terrific company).  How lucky we are to have him as a guide into the elusive and all-important subject of creativity."
--Jonathan Safran Foer

Philippe Petit has performed on the high wire more than eighty times around the world; he is also a magician, street juggler, visual artist, builder, lecturer, and writer. A frequent contributor to TED and other national venues, he is the author and illustrator of several books, including To Reach the Clouds, the basis of the 2009 Academy Award–winning documentary Man on Wire. Petit lives in upstate New York.
Loading...
or
Not Currently Available for Direct Purchase