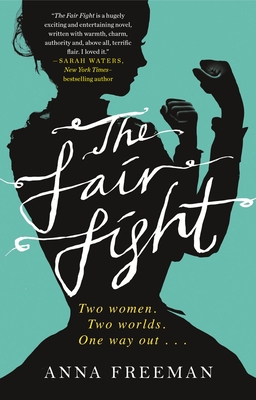 The Crimson Petal and the White meets Fight Club: A page-turning novel set in the world of female pugilists and their patrons in late eighteenth-century England.

Moving from a filthy brothel to a fine manor house, from the world of street fighters to the world of champions, The Fair Fight is a vivid, propulsive historical novel announcing the arrival of a dynamic new talent.

Born in a brothel, Ruth doesn’t expect much for herself beyond abuse. While her sister’s beauty affords a certain degree of comfort, Ruth’s harsh looks set her on a path of drudgery. That is until she meets pugilist patron George Dryer and discovers her true calling—fighting bare knuckles in the prize rings of Bristol.

Manor-born Charlotte has a different cross to bear. Scarred by smallpox, stifled by her social and romantic options, and trapped in twisted power games with her wastrel brother, she is desperate for an escape.

After a disastrous, life-changing fight sidelines Ruth, the two women meet, and it alters the perspectives of both of them. When Charlotte presents Ruth with an extraordinary proposition, Ruth pushes dainty Charlotte to enter the ring herself and learn the power of her own strength.

A gripping, page-turning story about people struggling to transcend the circumstances into which they were born and fighting for their own places in society, The Fair Fight is a raucous, intoxicating tale of courage, reinvention, and fighting one’s way to the top.

Praise For The Fair Fight: A Novel…

“The Fair Fight is a hugely exciting and entertaining novel, written with warmth, charm, authority and, above all, terrific flair. I loved it.” —New York Times-bestselling author Sarah Waters

“In sensuous, evocative prose, The Fair Fight wholly captures the spirit of 18th century Bristol's female pugilists and their patrons. An absorbing, bawdy tale of passion, class conflict and surprising friendship, it's a fabulous piece of writing.” —national-bestselling author of The Painted Girls, Cathy Marie Buchanan

“Anna Freeman's familiarity with this rough and raunchy period of history and her wonderfully imagined cast of characters, often down but never out, makes this a brilliant debut novel.”—The Times (London)

“Truly bears comparison with Michel Faber's The Crimson Petal and the White as first-time author Freeman … brings the 18th century to throbbing life, in an immersive novel rich with extraordinary characters and a cracking plot.” —The Bookseller

“Brash and brave and unflinching- a violently satisfying read drawn as tight as corset stays.” —BookRiot

Anna Freeman supported herself during the writing of this book by bartending at the Hatchet Inn in Bristol, the very pub where this female pugilism took root over two hundred years ago. This is her first novel. She lives in Bristol.
Loading...
or
Not Currently Available for Direct Purchase