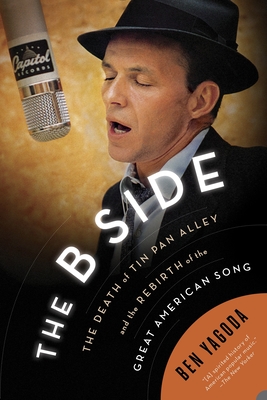 From an acclaimed cultural critic, a narrative and social history of the Great American Songwriting era.

Everybody knows and loves the American Songbook. But it’s a bit less widely understood that in about 1950, this stream of great songs more or less dried up. All of a sudden, what came over the radio wasn’t Gershwin, Porter, and Berlin, but “Come on-a My House” and “How Much Is That Doggie in the Window?” Elvis and rock and roll arrived a few years later, and at that point the game was truly up. What happened, and why? In The B Side, acclaimed cultural historian Ben Yagoda answers those questions in a fascinating piece of detective work. Drawing on previously untapped archival sources and on scores of interviews—the voices include Randy Newman, Jimmy Webb, Linda Ronstadt, and Herb Alpert—the book illuminates broad musical trends through a series of intertwined stories. Among them are the battle between ASCAP and Broadcast Music, Inc.; the revolution in jazz after World War II; the impact of radio and then television; and the bitter, decades-long feud between Mitch Miller and Frank Sinatra.

The B Side is about taste, and the particular economics and culture of songwriting, and the potential of popular art for greatness and beauty. It’s destined to become a classic of American musical history.

Praise For The B Side: The Death of Tin Pan Alley and the Rebirth of the Great American Song…

Praise for The B Side:

“Yagoda writes so engagingly, and has put in so much time and effort, that one closes his book with the feeling that he has made a significant contribution... [his] distillation of it all is a lovely way to help perpetuate a most precious commodity.” — The New York Times
"[A] spirited history of American popular music." — The New Yorker

“Yagoda lubricates the gears of history with both his own humor and colorful anecdotes.” — Entertainment Weekly

"A great many books celebrate the pre-rock Great American Songbook. Ben Yagoda’s highly original and shrewdly argued The B-Side isn’t one of them. It tells how the Songbook emerged, but is more intent on dissecting its meretricious demise, and the way a new songbook emerged from the rubble. It is anecdotal, illuminating, and persuasive." — Gary Giddins, author of Bing Crosby: A Pocketful of Dreams and Visions of Jazz

"[The B Side is] an entertaining and thoroughly researched exploration of America’s songwriting history. With deftness of pen and skill, Yagoda has produced a work that will appeal to both musicologists and fans." — Library Journal

“Actually, this wonderful chronicle is a B-side. . .This will be one big revelation for anyone steeped in a rock-centric understanding of pop history, and validation for those who treasure the Songbook in all its glory. And since these songs comprise so many strains of America’s cultural DNA, everyone stands to walk away from this richly told saga with not only a song in her/his heart, but also fresh knowledge about how it got there.” — PopMatters

“The B-Side is a must-read for anyone interested in the rise of rock and the shockwaves it sent through the American music business….Yagoda also poignantly conveys the pain of the generation pushed aside in the process.” — BookForum

Ben Yagoda is a journalism professor at the University of Delaware. He is the author, coauthor, or editor of twelve books, including About Town: The New Yorker and the World It Made; How to Not Write Bad; Memoir: A History; and Will Rogers: A Biography. He contributes to The Chronicle of Higher Education’s “Lingua Franca” blog and has written for Slate, The New York Times Magazine, Esquire, and The American Scholar, among other publications. Yagoda lives in Swarthmore, Pennsylvania, with his wife.
Loading...
or
Not Currently Available for Direct Purchase