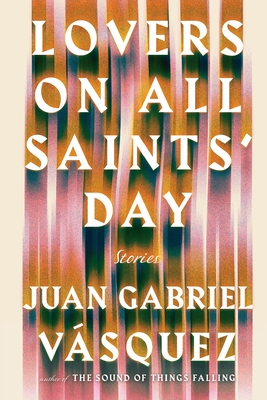 Lovers on All Saints' Day

From the award-winning, bestselling author of The Sound of Things Falling and Reputations, a brilliant collection of stories that showcases why he is one of the best writers—in any language—working today.

Lovers on All Saints' Day is an emotional book that haunts, moves, and seduces. Juan Gabriel Vásquez, the brilliant novelist, now brings his keen eye and rich prose to the themes of love and memory in these seven powerful stories.

Vásquez achieves an extraordinary unity of emotion with these fragmented lives. A Colombian writer is witness to a murder that will mark him forever. A woman sits alone in her house, waiting for her husband to return from an expedition to find wood for their stove, while he lies in another woman’s bed a few miles away, unable to heal the wound in his own marriage. In these stories, there are love affairs, revenge, troubled pasts, and tender moments that reveal a person’s whole history in a few sentences.

Set in Europe (the scene of Vásquez’s own self-imposed exile from Latin America) and never before available in English, this collection evokes a singular mood and a tone, and showcase Vásquez’s hypnotic writing. Vásquez is a humane, deeply insightful writer, and these stories leave one feeling transformed from the experience of reading them, with a greater vision of humanity and society, a greater understanding of relationships and of love.

Praise For Lovers on All Saints' Day: Stories…

Praise for Lovers on All Saints' Day:

“[Vásquez's] prose is rich in detail and sparkles with poetic lushness, as well as echoing the realist canon in the superb control of plot, setting and characters. Without truculence, he delivers a tense and exciting read.” — Miami Herald

"With few exceptions, the seven stories that compose the collection dwell with hunters, journalists, disgruntled heirs to stately property — but, whatever their occupations and interests, Vásquez searches them out in details that might otherwise have gotten squandered... At times it takes darkness — literally, in the case of the long night in 'Life on Grimsey Island' the collection's final story — to arrive at searing illumination." — NPR

“The twinned themes of this collection are love and memory, which Vásquez unspools through stories about love affairs, revenge, troubled histories — whole lives and worlds sketched with a few deft strokes.” — The Millions

“Here are revenge, murder and infidelity, dealt with in an elegant, detailed style.” — Financial Times

“[A] pervading atmosphere of melancholy, mists and rural isolation: it is this that gives the collection its powerful sense of coherence and unity…. [Lovers on All Saints' Day is] a testimony to the early, dark brilliance of Vasquez’ writing.” — Sunday Times (UK)


Praise for The Sound of Things Falling:

“The narrative escalates, the mystery deepens, and the scope of the story widens with each page. This terrific novel draws on Colombia’s tragic history and cycles of violence to tell the story of a troubled man trying to come to grips with the distant forces and events that have shaped his life.” —Khaled Hosseini

"Juan Gabriel Vásquez is a considerable writer. The Sound of Things Falling is an artful, ruminative mystery... And the reader comes away haunted by its strong playing out of an irreversible fate." —E. L. Doctorow

“The Sound of Things Falling is a masterful chronicle of how the violence between the cartels and government forces spilled out to affect and corrode ordinary lives. It is also Vásquez's finest work to date….  His stark realism - the flip side of the magical variation of his compatriot Gabriel Garcia Marquez - together with his lyrical treatment of memory produces both an electrifying and a sobering read.” –San Francisco Chronicle

“What Vásquez offers us, with great narrative skill, is that grey area of human actions and awareness where our capacity to make mistakes, betray, and conceal creates a chain reaction which condemns us to a world without satisfaction. Friends and enemies, wives and lovers, parents and children mix and mingle angrily, silently, blindly, while the novelist uses irony and ellipsis to unmask his characters’ 'self-protective strategies' and goes with them – not discovering them, simply accompanying them – as they come to understand that an unsatisfactory life can also be the life they inherit.” —Carlos Fuentes


Praise for The Informers:


Praise for The Secret History of Costaguana:

Juan Gabriel Vásquez’s books include the forthcoming novel Reputations, as well as the 2014 International IMPAC Dublin Literary Award winner and national bestseller, The Sound of Things Falling, and the award-winning The Informers and The Secret History of Costaguana. Vásquez’s books have been published in twenty-five languages worldwide. After sixteen years in France, Belgium, and Spain, he now lives in Bogotá.

Anne McLean translates Latin American and Spanish novels, short stories, memoirs, and other writings. She has twice won both the Independent Foreign Fiction Prize and the Premio Valle Inclán, and received the International IMPAC Dublin Literary Award with Juan Gabriel Vásquez for his novel The Sound of Things Falling. She lives in Toronto.
Loading...
or
Not Currently Available for Direct Purchase