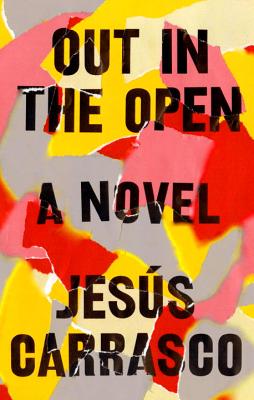 Out in the Open

"A harrowing, humane, and very beautiful book.” —Garth Greenwell, author of What Belongs to You

A searing dystopian vision of a young boy's flight through an unnamed, savaged country, searching for sanctuary and redemption—a debut novel from one of Europe's bestselling literary stars.

A young boy has fled his home. He’s pursued by dangerous forces. What lies before him is an infinite, arid plain, one he must cross in order to escape those from whom he’s fleeing. One night on the road, he meets an old goatherd, a man who lives simply but righteously, and from that moment on, their paths intertwine.

Out in the Open tells the story of this journey through a drought-stricken country ruled by violence. A world where names and dates don’t matter, where morals have drained away with the water. In this landscape the boy—not yet a lost cause—has the chance to choose hope and bravery, or to live forever mired in the cycle of violence in which he was raised. Carrasco has masterfully created a high stakes world, a dystopian tale of life and death, right and wrong, terror and salvation.

Praise For Out in the Open: A Novel…

"[B]leak and beautiful... I found myself awake in the early morning hours reading about the trials of the characters in their merciless world... [Carrasco's] incredibly clean, crisp language (as translated by Margaret Jull Costa), and his precise, deliberate exclusions.” —New York Times Book Review

"This novel’s deep theme is a peculiar kind of heroism—that of claiming, in a world stripped to necessity, a human remainder of grace: the choice to bear witness to ideals that are more precious than survival and that exist only in our affirmation of them. Out in the Open is a harrowing, humane, and very beautiful book." —Garth Greenwell, author of What Belongs to You

"A timely and certainly intense meditation on the role trust plays in cultural progress and preservation... a gripping read." —The Millions

"Contemporary novels rarely engage so plainly with faith and physical suffering. Its characters are observant because to be unobservant, even for a moment, would be fatal.... [B]eautifully written, the ending will break your heart; but that’s not the point. This is a novel in which heartbreak doesn’t matter. Only survival does." —Los Angeles Review of Books

"Beyond its timely themes of environmental catastrophe and forced migration, the book is written in spare, precise prose that lends it an epic feel. It’s no wonder, then, that Carrasco has already earned comparisons to Cormac McCarthy." —Chicago Review of Books

"Carrasco’s story is conveyed with an odd beauty and majesty." —The News & Observer

"Out In The Open is exceptionally lean and spry; it moves at a rapid pace… Carrasco offers a direct, straightforward, and sparse world, story, and character, but makes it all feel energetic, dynamic, and mysterious rather than hollow, frivolous, or inconsequential.” —A.V. Club

"A dynamite debut by a writer whose dark and symbolic view of an ominous society seems frighteningly realistic." —Library Journal (STARRED)

"Spare in dialogue but lush in cinematic description, Carrasco's novel (as translated by Costa) draws on old archetypes of journey and mentorship, depicting beauty in the gaunt, nameless landscape as well as the relationship between the man and the boy.... Harshly and elegantly told; a quest that feels both old and new." —Kirkus (STARRED)

"Carrasco has masterfully created a high stakes world, a dystopian tale of life and death, right and wrong, terror and salvation." —Bookbub

"An astounding and suspenseful read that feels both like ancient parable and ominous warning. Carrasco is a master stylist, and the ‘boy’ of this novel is the perfect hero. Your heart beats next to his on page after remarkable page." —Ariel Djanikian, author of The Office of Mercy

"[A] terrifying, and violent tale told in sparse, taut prose reminiscent of Cormac McCarthy... [P]assages of lovely writing coupled with the jaw-clenching tension and moments of hope make this a welcome introduction a new voice." —Publishers Weekly

"Undeniably impressive and compelling." —The Scotsman

"[A] tale told with savage precision, and filled with memorable passages." —The Times Literary Supplement

"The writing is austere with flourishes of great beauty from an exceptional translator." —The Independent (UK)

Jesús Carrasco was born in Badajoz, Spain, and now lives in Edinburgh, Scotland. Out in the Open, his debut novel, was a huge bestseller in Spain, published in more than twenty-one countries, and is the winner of many international awards, including the European Union Prize for Literature 2016 and an English PEN award.

Margaret Jull Costa has been translating Spanish, Portuguese, and Latin American fiction for more than twenty years, including authors like Javier Marías.
Loading...
or
Not Currently Available for Direct Purchase