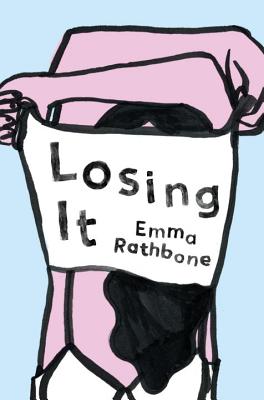 "Wise and witty... Losing It is cringingly insightful about sex and dating and all the ways we tie ourselves into knots over both." --The New York Times Book Review

A hilarious novel that Maggie Shipstead calls "charming... witty and insightful," about a woman who still has her virginity at the age of twenty-six, and the summer she's determined to lose it—and find herself.

Julia Greenfield has a problem: she's twenty-six years old and she's still a virgin. Sex ought to be easy. People have it all the time! But, without meaning to, she made it through college and into adulthood with her virginity intact. Something's got to change.

To re-route herself from her stalled life, Julia travels to spend the summer with her mysterious aunt Vivienne in North Carolina. It's not long, however, before she unearths a confounding secret—her 58 year old aunt is a virgin too. In the unrelenting heat of the southern summer, Julia becomes fixated on puzzling out what could have lead to Viv's appalling condition, all while trying to avoid the same fate.

For readers of Rainbow Rowell and Maria Semple, and filled with offbeat characters and subtle, wry humor, Losing It is about the primal fear that you just. might. never. meet. anyone. It's about desiring something with the kind of obsessive fervor that almost guarantees you won't get it. It's about the blurry lines between sex and love, and trying to figure out which one you're going for. And it's about the decisions—and non-decisions—we make that can end up shaping a life.

Emma Rathbone is the author of the novel The Patterns of Paper Monsters. She is the recipient of a Christopher Isherwood Grant in Fiction, and her work can also be seen in the New Yorker. She is also a writer for the upcoming Netflix comedy, G.L.O.W., produced by Jenji Kohan. She lives in Los Angeles.

Praise For Losing It: A Novel…

"Wise and witty... Losing It is cringingly insightful about sex and dating and all the ways we tie ourselves into knots over both.... [Rathbone] has a knack for coming up with sharp images and painfully funny observations.... The novel also honors what it feels like to be a smart, overly self-conscious young woman without sugarcoating how crazy self-conscious women can seem. Rathbone slyly constructs a female protagonist who is a product of a sex-crazed culture but not a victim of it.... The genius of Losing It is that Rathbone resists turning her novel into a conventional romance." —New York Times Book Review

“A charming, truthful story about a lovably imperfect young woman whose virginity has overstayed its welcome; a witty and insightful novel about the mysteries of human connection.”
—Maggie Shipstead, author of Seating Arrangements and Astonish Me

"[T]he mysteries of intimacy deepen in this mordant novel about taking charge and letting go.” —O, the Oprah Magazine

"It’s part 'Sisterhood of the Traveling Pants,' part 'American Pie,' with a dry humor that’ll keep you flipping." —The Skimm

“Losing It presents an accurate — and entertaining — depiction of what it feels like to be alive, right now, in this absurd, contemporary moment. Rathbone’s accuracy is what makes her so funny; it’s her grace as a writer that elevates this book from a series of comedic one-liners to art… Emma Rathbone’s project, it turns out, is more ambitious than expected. That’s something to celebrate.” —Edan Lepucki, San Francisco Chronicle

“Julia’s crises in life and love are cringeworthy in the best possible way and Rathbone’s hilarious novel will leave you begging for more.” —Glamour

“Julia’s desperation is tragic, hilariously funny, and all too relatable to anyone who has felt like life has moved on without her.” —Real Simple

“[Rathbone] knows how to find the comedy in Julia’s neurotic obsessive fantasies, and the tragedy in her series of unendingly terrible adventures in online dating... She creates a different kind of story: one of neurotic self-obsession, of a smart, frustrated woman, of the unfortunate truth that so many women are convinced that their value depends on men’s judgment — all within a narrative that actually has very little to do with men. It’s a story that’s well worth reading.” —Vox

“A candid yet funny take on just what desire and love mean.” —The Millions

“Losing It sheds light on alternative sex positivity (one that respects one’s choice to wait), and shatters the stigma surrounding the subject, but not without plenty of humor involved.” —Nylon

"Funny and insightful… Rathbone writes with pinpointed accuracy the feelings of discontent and despair that can arise from feeling lost or stuck in life… [She] imbues Julia with such warmth and humor, and writes her with such affection, you can’t help but root for the misguided character even when you want to shake her. This is a testament to Rathbone’s writing and Julia’s voice… Losing It is a terrific and funny meditation on the deep pockets of discontent in life, growing up, and seizing the right opportunities for connection when you can.” —The Rumpus

“A slightly neurotic and wholly hilarious meditation on the difference between love and lust, The One and close enough, Losing It is about so much more than a quest for sex: It's a confrontational narrative about all the other stuff that goes along with it, and the intimate decisions we make that shape our lives for better — and worse.” —Refinery29

"Every single page of Emma Rathbone's Losing It contains a line so funny, so awkward, so perfect, that you do not want this momentous summer to end. Rathbone's writing feels effortless, but it detonates in such wonderful ways. An amazing book."
—Kevin Wilson, author of The Family Fang

“Emma Rathbone has the wisdom to understand that we are all the protagonists of our own stories, and the sense of humor to recognize the absurdity of that fact. With a delicate touch, Rathbone takes a fraught moment in one young woman's life and fashions a funny, sad, genuinely moving story from it. Her Julia Greenfield is entirely imperfect and completely sympathetic, and Losing It is a bright gem of a novel.”
—Lauren Fox, author of Days of Awe and Friends Like Us

“Wry and moving, a story about a young woman scuttled in love and work who fears that some kinds of loneliness might be impenetrable. A heartfelt and incredibly funny novel.”
—Thomas Pierce, author of Hall of Small Mammals

"A candid yet funny take on just what desire and love mean." —The Millions, The Most Anticipated Books of 2016

"A contributor to the New Yorker's 'Shouts and Murmurs' humor column, Rathbone reliably wrings the humor out of this situation, but more impressively, she manages to evoke its poignancy.... Amusing but also smart about people and unexpectedly sweet." —Kirkus
or
Not Currently Available for Direct Purchase
Copyright © 2020 American Booksellers Association