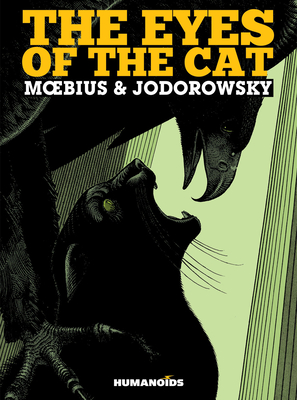 The Eyes of the Cat

In a desolate dreamscape world, a man, a bird, and a cat interact in a unique apocalyptic yet poetic fashion… Alexandro Jodorowsky and Moebius, creators of the Sci-Fi classic "The Incal," initially teamed up on this 1978 gem, where words and images alternate in mesmerizing fashion.

Jean "Mœbius" Giraud was a French artist, cartoonist and writer who worked in the Franco-Belgian bandes dessinées tradition. Giraud garnered worldwide acclaim predominantly under the pseudonym Mœbius and to a lesser extent under the name Gir, which he used for the Blueberry series and his paintings. Mœbius' most famous work was The Incal, written by Alejandro Jodorowsky. He also contributed storyboards and concept designs to numerous science fiction and fantasy films, such as Alien, Tron, The Fifth Element and The Abyss.
Loading...
or support indie stores by buying on