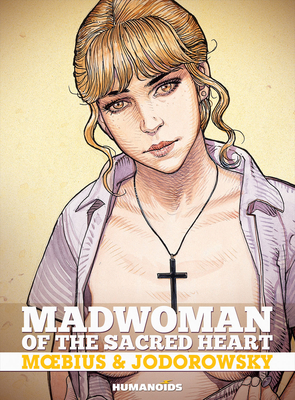 Madwoman of the Sacred Heart

Alan Mangel has it all. As a popular Philosophy Professor at the world famous Université de La Sorbonne, he is wealthy, married and academically acclaimed. On his sixtieth birthday, however, Alan’s life will crumble as Elisabeth, a beautiful young student, claims she received a vision from God that he is to impregnate her with the second-coming of John the Baptist. As Alan gives himself up to the wild forces bullying him through life, he engages on a spiritual journey that challenges his very "reality." Everything once true is proven to be false. Everything once false is proven to be true.

Praise For Madwoman of the Sacred Heart…

"Loaded with Jodorowsky's signature tropes, the story evolves into a full-blown hyperkinetic self-parody, fully aided and abetted by the loosest, most breezy work Moebius has done in years." - PublishersWeekly.com "[Jodorowsky] tackles philosophical ideas through off-the-wall humor, lack of sentimentality while taking a perverse joy in providing Zen-master jolts of mystifying shock to the reader’s frontal lobes." - Bookgasm.com

Jean "Mœbius" Giraud was a French artist, cartoonist and writer who worked in the Franco-Belgian bandes dessinées tradition. Giraud garnered worldwide acclaim predominantly under the pseudonym Mœbius and to a lesser extent under the name Gir, which he used for the Blueberry series and his paintings. Mœbius' most famous work was The Incal, written by Alejandro Jodorowsky. He also contributed storyboards and concept designs to numerous science fiction and fantasy films, such as Alien, Tron, The Fifth Element and The Abyss.
Loading...
or
Not Currently Available for Direct Purchase