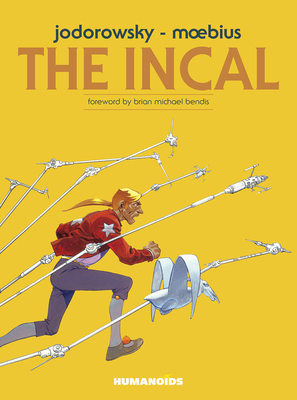 The Sci-Fi masterpiece by Moebius and Jodorowsky about the tribulations of the shabby detective John Difool as he searches for the precious and coveted Incal.

John Difool, a low-class detective in a degenerate dystopian world, finds his life turned upside down when he discovers an ancient, mystical artifact called "The Incal." Difool’s adventures will bring him into conflict with the galaxy’s greatest warrior, the Metabaron, and will pit him against the awesome powers of the Technopope. These encounters and many more make up a tale of comic and cosmic proportions that has Difool fighting for not only his very survival, but also the survival of the entire universe.

Praise For The Incal…

"The Incal isn’t a book you just read. It’s a science fiction book you experience. A true classic in every sense of the world. It’s ingenious. And it’s bonkers!... A+" - Forces of Geek "Whether you believe this or not, this is an important piece of work, historically and artistically, and should be read by all comic fans. " - BackwardsCompatible.co.uk "The Incal deserves its place at the top table of comic greatness alongside the best the medium has to offer. 5/5" - SFX Magazine "The Incal is entrancing...It crackles with invention: if you like your sci-fi, you’ll love this." - The Guardian "The Incal Is The Greatest Comic That You Probably Haven’t Read..." - Nothing But Comics "Moebius was a master, a rare talent of nuclear-powered imagination, and with few peers in his craft." - Kamloops This Week "It's one of the great comics team-ups..." - Rolling Stone

Jean "Mœbius" Giraud was a French artist, cartoonist and writer who worked in the Franco-Belgian bandes dessinées tradition. Giraud garnered worldwide acclaim predominantly under the pseudonym Mœbius and to a lesser extent under the name Gir, which he used for the Blueberry series and his paintings. Mœbius' most famous work was The Incal, written by Alejandro Jodorowsky. He also contributed storyboards and concept designs to numerous science fiction and fantasy films, such as Alien, Tron, The Fifth Element and The Abyss.
Loading...
or support indie stores by buying on