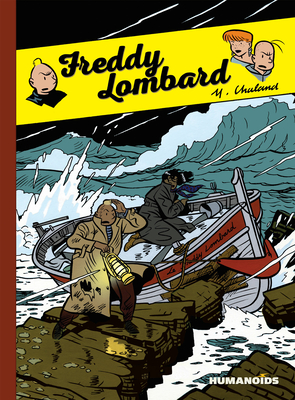 A "must have" collection of classic adventures by one of Europe's most feted cartoonists. Impetuous Freddy Lombard and his frustrated, but faithful, friends, Dina and Sweep, go on six different adventures, from exploring Belgian castles and African jungles, to being swept up in revolutionary Budapest or caught up in the secrets surrounding a futuristic jet Forever broke, the trio constantly look for ways to hustle enough money to live and continue solving mysteries in these tales with unexpected twists and lots of laughs.

Yves Chaland was a French cartoonist born in 1957 in Lyon, who was a master of the ligne-clair style. He helped launch the nostalgic 1950s Atomic style in Franco-Belgian comics in the 1980s. He created the characters of Freddy Lombard, and Young Albert, a mischievous boy living in a working-class area of Brussels. He also designed many advertising campaigns in his crisp, clean, retro-modern cartoon style. In 1990, Chaland died in a tragic car accident. After his death, several books with his illustrations and unfinished stories have been published.
Loading...
or
Not Currently Available for Direct Purchase