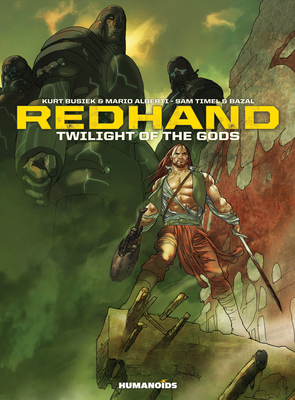 Redhand - Twilight of the Gods

Set free in a foreign world and without memory of his origins, all Redhand wants is a peaceful life. But destiny wants it otherwise. Touched by a prophecy, imbued with incredible fighting skills and immune to magic, he is preordained to bring about great change to a land burdened by strict worship practices and warring factions.

Kurt Busiek has been writing comics professionally since three days before he graduated from college in 1982, when he sold a Tales of the Green Lantern Corps backup story that appeared in Green Lantern #162. Since then, he's worked on just about everything from Action Comics to Zot!, including runs on Avengers, Superman, Conan and others, and has co-created Thunderbolts, The Autumnlands, Arrowsmith and more. He's best known for his work on the multiple-award-winning Marvels and Astro City. Mario Alberti is an award-winning Italian artist who has illustrated Nathan Never (Sergio Bonnelli) and several covers for DC Comics and the bestselling Spider-Man & the X-Men (Marvel). Sam Timel is an American author known for writing the series Milan K. and contributing to Redhand: Twilight of the Gods. Bazal (Oscar Bazaldua) is a veteran Mexican comics artist whose work includes Retroworld, also from Humanoids.
Loading...
or support indie stores by buying on