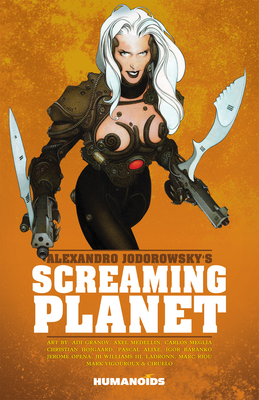 Alexandro Jodorowsky steps up to the challenge of the short graphic novel story format by collaborating with an international panoply of artists.

A collection of Sci-Fi short stories all written by Alexandro Jodorowsky ("The Incal", "The Metabarons") and illustrated by talent from various countries and different graphic traditions. The thematic thread of these tales: an asteroid spawned from the destruction of a planet produces sounds (a "howling shriek") which, when crossing an inhabited world, creates a change or imbalance within it…

"Just calling this a regular anthology would be unfair. ‘Screaming Planet’ puts together one of Europe’s visionary writers with a regular who’s who of artistic talent. Jodorowsky seamlessly steps out of his long term serial comfort zone and delivers some distinctive short stories playing to the strengths of his artists who all get their moment in the sun. Just watch your head for chunks of screaming rocks!" - BrokenFrontier.com

Along with nurturing his many other talents, Jodorowsky remains a unique storyteller whose published contributions have secured his status as one of the world's most prolific graphic novel writers.
Loading...
or
Not Currently Available for Direct Purchase