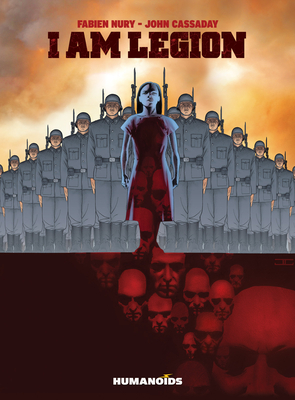 A supernatural take on World War II espionage featuring a girl with the ability to possess other bodies. Europe, December 1942. The global conflict has reached a fever pitch. The Nazis are at the height of their power, but the Allies have had their first victories both in Stalingrad and in the Pacific. Never has the war's outcome been so much in doubt. Amidst this chaos, the destinies of several men will cross through a project code named Legion, which consists of a series of horrific tests that a young Romanian girl with apparent supernatural abilities must undergo. Her 'skills, ' if fully exploited by the Nazis, would give them unimaginable power...

John Cassaday began his professional career with Negative Burn. It wasn't until he showed his portfolio to Mark Waid at San Diego Comic Con that he began receiving job offers from Dark Horse, DC, and Marvel. He eventually collaborated with Joss Whedon on Astonishing X-Men which led to more work and even directing an episode of Whedon's television show, Dollhouse. Most recently he helped relaunch the successful Star Wars comic franchise alongside Jason Aaron for Marvel Comics. Fabian Nury began his career as a copywriter and creative director in advertising, of which he worked until 2003. As an admirer of "Blueberry," "Watchmen," and more, he decided to plunge into the world of comics after meeting Xavier Dorison. He has written numerous graphic novels including "The Chronicles of Legion" series and one "XIII" album.
Loading...
or support indie stores by buying on
(This book is on backorder)