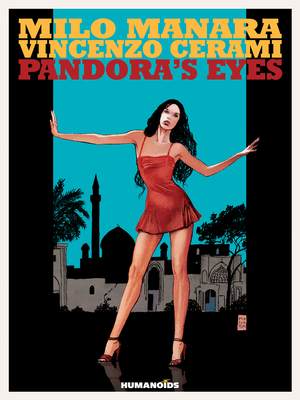 Pandora is a beautiful young woman living with her adoptive parents in a major European city. Out of the blue, she learns that her real father might be a terrible mob boss wanted by the international authorities. When she is kidnapped and taken to Turkey, she is forced to confront her dangerous past and investigate the motives of the people closest to her. Vincenzo Cerami, a screenwriter (Roberto Benigni’s international hit "Life is Beautiful"), collaborates here with one of Europe’s greatest artists, Milo Manara.

Born in Rome, Vincenzo Cerami was an Italian screenwriter, novelist, and poet. From 1967 on he contributed or wrote or adapted screenplays for more than 40 feature films. In 1976, his first novel, A Very Normal Man, was published and was an immediate hit, and subsequently adapted into a film in 1977 by Mario Monicelli. Also critically acclaimed was his novel Goodbye Lenin, published in 1981. In 1996 he was a member of the jury at the 46th Berlin International Film Festival, and in 1999 he was nominated for the Academy Award for Original Screenplay for the Roberto Benigni film Life Is Beautiful.
Loading...
or support indie stores by buying on
(This book is on backorder)