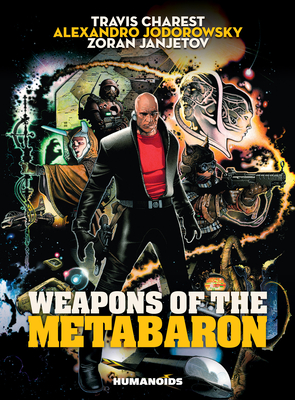 Weapons of the Metabaron

The seminal series' spin-off story recounting how the mightiest warrior in the universe built his arsenal of war.

The creative trio of Jodorowsky, Charest, and Janjetov shows us how the Metabaron assembled the galaxy’s most powerful and destructive weapons in an effort to secure his position as the universe’s ultimate warrior. Travis Charest's (Artist of Wildcats, WildC.A.T.s/X-Men: The Golden Age, and Star Wars comics Cover Artist) interpretation of 'The Metabarons' mythology.

Praise For Weapons of the Metabaron…

"Weapons of the Metabaron is a beautiful book to look at. Charest and Janjetov artwork visually captures Jodorowsky’s imagination and creates worlds and characters that are mythic and grand. " - Newsarama "Charest’s dynamic and vibrant images paired with Jodorowsky’s mystical storytelling is something very special." - The Beguiling "Cleverly written and exquisitely rendered, this is another winner..." - Junk Food for Thought "The Charest art is gorgeous and finely detailed..." - Comic Book Daily "For fans of the Metabaron story and the Jodorverse in general, Weapons of the Metabarons is a must read tale. Not only is it engaging and action-packed, but it also features some of the most impressive art of the series thanks to Charest's work." - Figures.com

Travis Charest was born in Leduc, a small town in the Canadian province of Alberta. He discovered his first comic book at his grandmother’s house, which inspired him to start drawing. He submitted his work to DC Comics, and based on his early work for them was asked by Jim Lee to come to California and join the Wildstorm Studios, for whom he drew the Wild CATS revamp. He eventually travelled to Paris to collaborate on a one-off graphic novel taking place within the famed universe of The Metabarons, created by Alejandro Jodorowsky. The project also involved Before The Incal and The Technopriests artist Zoran Janjetov and would come to be known as Weapons of the Metabaron. By 2007, Charest had settled in California and developed his own webcomic, Spacegirl, of which a collected book version was self-published in 2008.

Zoran Janjetov is among the most prominent comics creators of former Yugoslavia and has been published worldwide. He is best known as the illustrator of "Before The Incal," also written by Alexandro Jodorowsky.
Loading...
or support indie stores by buying on
(This book is on backorder)