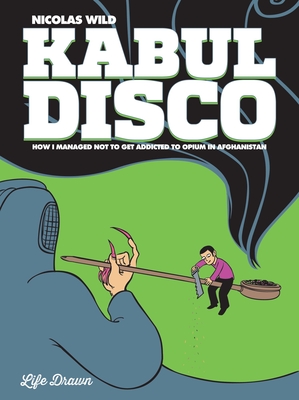 How I Managed Not to Get Addicted to Opium in Afghanistan

A satirical autobiography about a young Frenchman and his hilarious, yet poignant, adventures in the heart of Afghanistan. It's 2005. Nicolas Wild is a French cartoonist. He's broke and about to be homeless. He's a man without a plan. That is until destiny shows up in his inbox: a paid job... In Afghanistan In his graphic Travelogue series, Nicolas Wild brilliantly explores the differences between the Afghan cultures around him and his own, as he and his fellow expat friends crash Asura celebrations, avoid the afterlife, and muse on the differences between Christian Easter egg hunts and Islamic penance.

Born in 1977 in the Alsace region of France, Nicolas Wild, a former student of the famous illustration workshop at the Strasbourg School of Applied Arts, created and co-wrote "Le voeu de Marc" ("Marc's Wish"), together with fellow French illustrators Boulet and Lucie Albon. In this all-ages graphic novel, he showed a hint of the dark comedic tone that had already been revealed in a series of comic strips published in 2000 under the title "Le Bourreau" ("The Executioner"). In 2005, Nicolas accepted a job offer in Afghanistan where he was given the task of drawing an adaptation of the Afghan constitution. In 2007, he launched a series of books titled Kabul Disco in which he recounted his experiences as an expat there. The discovery of the Persian world then led him to Iran, an adventure he subsequently catalogued in the series So Mute was Zarathustra, an eye-opening journey through current events in Iran. He is currently at work on Kabul Disco Book 3.
Loading...
or
Not Currently Available for Direct Purchase