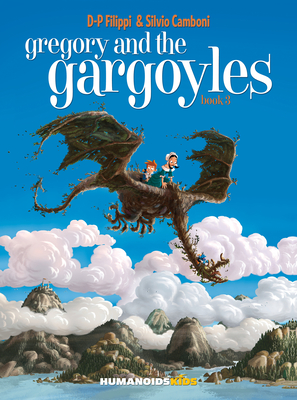 Gregory and the Gargoyles Book 3 (Hardcover)

The fantasy adventure trilogy of a young boy's travels through a long-forgotten world where magic still rules. Young Gregory grows unhappy and restless when his father moves the entire family into an old family home in a new neighborhood. While awake in his bed, a glimmer from the floor attracts Gregory's attention. He discovers a medallion on which there is a drawing of the great church that sits opposite his new residence. Bullied for being new, and ignored at home, Gregory decides to explore the church and the giant stone statue that rests atop of it. During his visit, the medallion begins to shine intensely and, with a flash, Gregory is hurled back to the 17th century, where gargoyles, sorcerers and magical beings live in harmony and magic.

Denis-Pierre was born in France. Very early he geared his work towards children and YA. During a book show, Filippi asked Tiburce Oger, author of Gorn, to read one of his tale. Oger et Filippi then created Orull, published by Delcourt. Later, Filippi joined Boiscommun on the Book of Jack then the Book of Sam, 2 stories from the trilogy Halloween Tales. Since then, Denis-Pierre has worked on John Lord, Muse (with Terry Dodson), Marshals and Gregory & The Gargoyles, all published by Humanoids. After graduating from Milan Polytechnic, Silvio started a carrer in illustration and comics, and worked on Walt Disney movies like Toppling, MM, Mickey, Papering Mese, Paperfantazy, Monster Allergy, etc. In 1998, he founded the Sardinian School, a graphic novel and comics school. He has since published several graphic novels, the most successful being the Gregory & The Gargoyles series from 2004 to 2014.
or
Not Currently Available for Direct Purchase
Copyright © 2020 American Booksellers Association