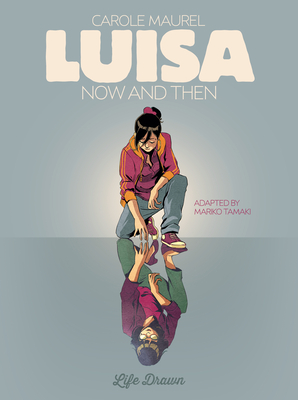 At 32, Luisa encounters her 15-year-old self in this sentimental and bold story about self-acceptance and sexuality. A disillusioned photographer has a chance encounter with her lost teenage self who has miraculously traveled into the future. Together, both women ultimately discover who they really are, finding the courage to live life by being true to themselves. A time-traveling love story that turns coming-of-age conventions upside down, Luisa is a universal queer romance for the modern age.

Carole worked as a graphist and animator for TV programs, before she published her first graphic novel Les Chroniques Mauves, a collective work about the lesbian community. She has since published several graphic novels, always a characteristic mix of feminine sensibilities and humor. Mark Tamaki is known for her bestselling graphic novels, Skim, Emiko Superstar and This One Summer. She is the winner of an Ignatz Award, a Joe Shuster Award and a Doug Wright Award. She was also nominated for the Children's literature category at the 2008 Governor General's Awards. This One Summer, illustrated by Jillian Tamaki, was nominated for a 2014 Ignatz Award, and won the 2015 Michael L. Printz Award and a Caldecott Honor from the American Library Association. In 2016 she won the German Rudolph-Dirks-Award in the category Youth Drama / Coming of Age (for This One Summer). Tamaki was also awarded an Honour of Distinction by the Dayne Ogilvie Prize, a literary award for lesbian, gay, bisexual or transgender writers in Canada. She has written for both DC and Marvel comics as lead writer on the Hulk and Supergirl: Being Super.
Loading...
or support indie stores by buying on