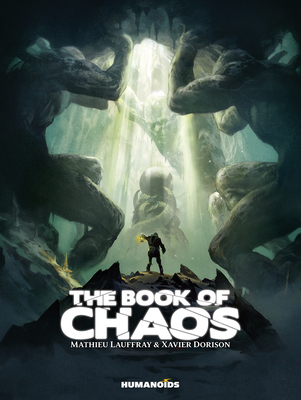 The Book of Chaos

A tale about the unleashing of an ancient evil and the anti-hero prophesized to stop it.

Archeologist Jack Stanton is the sole survivor of an expedition into the Himalayan mountains gone horribly wrong. Against all odds, he returns with proof of an advanced civilization that walked the Earth before mankind. A civilization of immense power, and incredible evil... Preparing for the book tour promoting his findings, he’s haunted by visions and attacked by a religious zealot warning of the dangers of his discovery. Dangers he doesn’t take seriously until a supertanker runs aground in New York and the catastrophe leaves him stranded in an infernal dimension. Could it actually be Hell? And if Jack is in Hell, what forces are now running amok on Earth?

Xavier Dorison is a rising stars in French comics. He is the author of several successful series including “Prophet,” “The Third Testament” and “Sanctum,” as well as a noted screenwriter and script doctor.

Mathieu Lauffray is a French artist known in the US for Star Wars (Dark Horse) covers and the graphic novel sequel to Treasure Island, Long John Silver. The second volume of the Long John Silver series was chosen for the Official Selection at the Festival d'Angoulême in 2009. A student of graphic design Mathieu applies his skills not only to graphic novels, but also film (The Tall Man, Blood: The Last Vampire, 10,000 BC, Brotherhood of the Wolf) and video games (Alone in the Dark).
Loading...
or
Not Currently Available for Direct Purchase