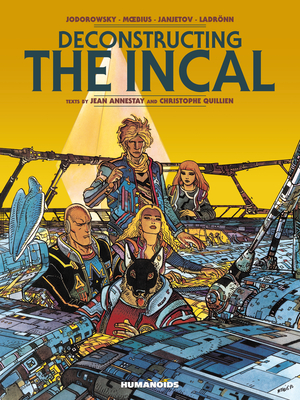 The second reference guide to the Jodoverse, focused on unveiling the secrets of the Universe's fiercest warrior clan: the Metabarons.

Deconstructing The Incal lifts the veil on many of the mysteries and secrets surrounding the seminal science-fiction graphic novel, which has become the cornerstone of the Jodoverse.This encyclopedic reference book, is packed with fascinating insights from The Incal's creators, Jodorowsky and Mœbius, alongside revealing text, and rare and unseen preliminary illustrations.

Jean "Mœbius" Giraud was a French artist, cartoonist and writer who worked in the Franco-Belgian bandes dessinées tradition. Giraud garnered worldwide acclaim predominantly under the pseudonym Mœbius and to a lesser extent under the name Gir, which he used for the Blueberry series and his paintings. Mœbius' most famous work was The Incal, written by Alejandro Jodorowsky. He also contributed storyboards and concept designs to numerous science fiction and fantasy films, such as Alien, Tron, The Fifth Element and The Abyss.
Loading...
or support indie stores by buying on
(This book is on backorder)