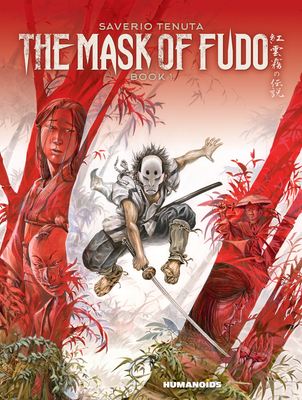 The Mask of Fudo Book 1

Nobu Fudo has worn the pale, wooden mask since childhood, when he was still known as Shinnosuke. He was just a poor boy who dreamed of becoming a powerful samurai. When his sister is attacked, his inner warrior awakens and his anger is unstoppable. But something else has also awakened. Something dark and terrible.

Saverio Tenuta was born in Rome in 1969 and studied painting at the Academy of Fine Arts. He began his career as a graphic artist and later attended the International School of Comics in Rome, where he would also teach. In addition to contributing to the magazine Heavy Metal, he worked for DC Comics on JLA: Riddle of the Beast. In 2006, the first of his own series — which he wrote and illustrated — the Japanese medieval adventure The Legend of the Scarlet Blades was released in France by Humanoids. He expanded the Legend world in 2014 with Izuna, which Tenuta wrote while Carita Lupatelli took over the drawing duties. More series within the Legend universe are forthcoming.
Loading...
or
Not Currently Available for Direct Purchase