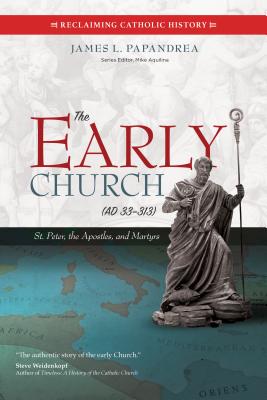 St. Peter, the Apostles, and Martyrs

The first three centuries of the Christian faith were a period of missionary zeal, deep thought, and tribulation. In The Early Church (33-313): St. Peter, the Apostles, and Martyrs, Catholic historian and biblical expert James Papandrea dispels what he calls common "mythconceptions" about the early years of Christianity. Tracking the challenges of heresy and persecution throughout the period, Papandrea shines a spotlight on the earliest saints and explores the growth and development of the new Church.

The first Apostles spread the message of Jesus Christ and were willing to suffer and die for their faith. The next generations of believers followed their example, producing inspiring martyrs including Polycarp, Justin, Perpetua, and Sebastian, and great thinkers such as Irenaeus, Tertullian, and Eusebius. In The Early Church (33-313), author and historian James Papandrea presents a clear account of the Church's first three centuries and provides evidence to refute fourteen commonly held beliefs about the Catholic Church. You will learn:

With clear explanation and inspiring stories, Papandrea sorts through what we do and don't know about the early Church and enables Catholics and fellow Christians to make sense of the Church's beginnings.

James L. Papandrea is a Catholic author, professor, speaker, and musician. He teaches Church history and historical theology at Garrett-Evangelical Theological Seminary at Northwestern University. Papandrea is a fellow of the St. Paul Center for Biblical Theology and also serves as a consultant for adult faith formation. After earning his master's degree from Fuller Theological Seminary, Papandrea spent several years focusing full time on youth and music ministries and serving as a consultant in youth ministry. He earned his doctorate in the history and theology of the early Christian church from Northwestern. He has also studied Roman history at the American Academy in Rome. Papandrea is the author of fifteen books for academic and general audiences, including A Week in the Life of Rome, From Star Wars to Superman, and Trinity 101. He has appeared on EWTN TV and a number of Catholic radio shows. He is a member of the Society of Biblical Literature, the North American Patristics Society, and the Catholic Association of Music. Papandrea lives in the Chicago area. Mike Aquilina is a Catholic author, popular speaker, poet, and songwriter who serves as the executive vice president of the St. Paul Center for Biblical Theology.
or
Buy Here
Copyright © 2020 American Booksellers Association