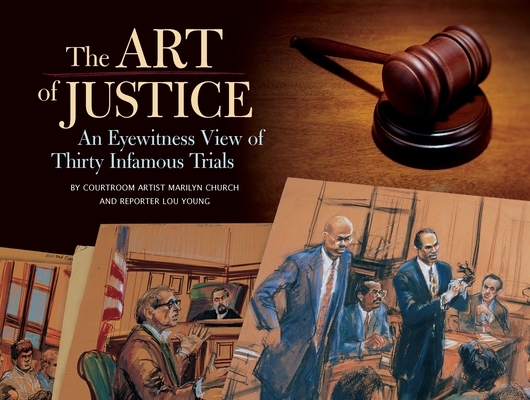 The Art of Justice

As the principal courtroom sketch artist for the New York Times and WABC in New York, Marilyn Church covered many of America’s most infamous trials, from the downfall of John Gotti to the trial of would-be presidential assassin John Hinckley; from the conviction of Martha Stewart to the Sean “Puffy” Combs weapons possession trial.

In The Art of Justice, Marilyn Church takes readers into the courtroom for an insider’s view of thirty sensational cases. Experience the story behind the dramatic headlines in the legal battles of subway vigilante Bernhard Goetz, Long Island Lolita Amy Fisher, preppie murderer Robert Chambers, David “Son of Sam” Berkowitz, the bizarre child custody war between Woody Allen and Mia Farrow, and many, many others.

In addition to more than one hundred brilliant full-color reproductions of Church’s artwork, The Art of Justice also includes compelling trial summaries by noted television journalist Lou Young and a Celebrity Gallery depicting the courtroom appearances of Mick Jagger, Yoko Ono, Paul Newman, Caroline Kennedy, Donald Trump, and a host of other luminaries.

Part artistic celebration, part cultural history, The Art of Justice is the perfect addition to any lawyer’s library and essential reading for true-crime fans everywhere!

Marilyn Church (www.marilynchurch.com) is an accomplished professional painter and the best-known courtroom artist of our time. As the primary artist for the New York Times and WABC in New York, she covered many of the most infamous trials of the last three decades. She won an Emmy for her work recreating the scene of John Lennon’s murder and a New York Press Award for her coverage of the Jean Harris murder trial. Her drawings have been displayed at the New York Museum of Television and Radio, the Museum of Natural History in New York, the U.S. Supreme Court, and Harvard Law School, as well as in many other shows and exhibitions. Lou Young is a reporter with WCBS-TV in New York. He is a multiple Emmy Award–winner, and has also received honors from the Associated Press, United Press International, Radio and Television News Association, New York Press Club, and the Society of Professional Journalists. He has been a broadcast journalist for more than thirty years.
or
Not Currently Available for Direct Purchase