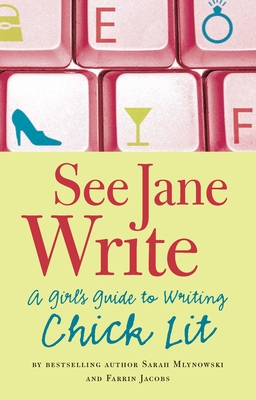 With chick lit novels popping up on every bestseller list, millions of readers are all thinking the same thing: I could write this stuff. I could write a bestseller and never go back to the office again!

And here’s the guide that will show you how. Bestselling novelist Sarah Mlynowski and veteran chick lit editor Farrin Jacobs cover every stage of developing and selling your soon-to-be bestselling novel, with information on

•  developing an idea
•  learning the basics of plotting
•  deciding on a point of view
•  pacing, and conflict
•  making your characters likable
•  finding an agent

—and much more, including humorous tips and advice from scores of established writers (from Meg Cabot and Marian Keyes to Emily Giffin and Sophie Kinsella). If you’ve got stories to tell, See Jane Write will take care of the rest!

Sarah Mlynowski started her publishing career at Harlequin Enterprises and used her experiences to fuel her first chick lit novel, Milkrun, which has sold more than 600,000 copies worldwide. She is the author of Fishbowl, As Seen on TV, Monkey Business, Me vs. Me, Bras & Broomsticks, and Frogs & French Kisses, and coeditor of the bestselling chick lit anthologies Girls’ Night In and Girls’ Night Out. She lives in New York City. Farrin Jacobs is a former chick lit editor for Red Dress Ink and current freelance editor and writer. Her articles have appeared in Entertainment Weekly, the New York Times City section, Blender, Time Out New York, Men’s Journal, and Teen People. She lives in New York City.
or
Not Currently Available for Direct Purchase
Copyright © 2020 American Booksellers Association