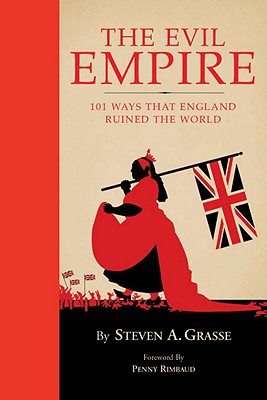 In The Evil Empire, Steven A. Grasse exposes the secret history of England’s global misdeeds. He asks what few have dared to ask: Having spent the better half of the millennium
turning the world into their personal litter box, where do the English get off blaming everything on America?

After all, whose imperialistic shenanigans is Osama bin Laden really trying to avenge? Whose landgrabbing ways put the Palestinians and Israelis at each others’ throats? Who invented machine guns, wage slavery, and concentration camps?

The closer you look at English­­ history, the more you realize they’re in no position to be pointing fingers. This outrageous indictment is sure to make blue bloods boil on both sides of the Atlantic.

Praise For The Evil Empire…

“In this cheeky look at the low points of the U.K. past and present, adman Grasse…doesn't just twist the Royal Lion's tail, he nearly yanks it off.... Though tempered with plenty of humor, this intense diatribe is sure to rankle Anglos and their fans; as such, it will make a perfect gag gift…”—Publishers Weekly

“The Evil Empire is sure to change hands as a novel office gift.”—Advertising Age

Steven A. Grasse is a man of many talents. He is the founder and CEO of a large independent ad agency, owns several successful clothing and liquor brands, and has written and directed many independent films. This is his first book.
Loading...
or
Not Currently Available for Direct Purchase