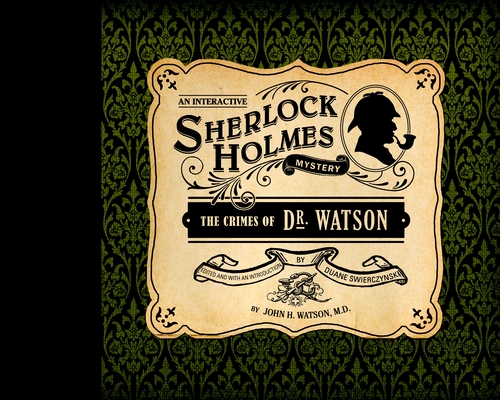 After the rooms at 221B Baker Street are set ablaze—and a mutilated corpse is discovered in the wreckage—Dr. John H. Watson is arrested and imprisoned at Coldbath Fields penitentiary. Writing from a cramped and dimly lit cell, Watson describes the mysterious events leading up to his arrest. Someone has been mailing him a series of cryptic warnings. His lifelong friend Sherlock Holmes has vanished in the raging waters of Reichenbach Falls. And Professor Moriarty’s criminal empire is expanding across Europe and throughout America.

In a desperate attempt to clear his good name, Watson has compiled twelve clues that may prove his innocence, including:

•  The front page of a newspaper from Thousand Oaks, California
•  A catalog of Victorian fashions and merchandise
•  An empty matchbook containing cryptic handwritten notes
•  The complete text of “The Final Problem,” Watson’s famous account of the death of Sherlock Holmes
•  Plus a theater ticket, an arrest report, a railroad timetable, and more

All twelve clues have been painstakingly reproduced for this volume, along with the complete text of Watson’s manuscript and specially commissioned illustrations by Homes aficionado Clint Hansen.

Praise For The Crimes of Dr. Watson (Interactive Mysteries #1)…

“For a Dark and Stormy Night.”—Parade Magazine (Parade Picks)

“The Crimes of Dr. Watson has got to be one of the strangest (and most inventive) books we’ve seen.”—Diversion Magazine

John H. Watson, M.D., authored dozens of adventures about the great detective Sherlock Holmes (most were published under the name of his literary agent, Sir Arthur Conan Doyle). Duane Swierczynski's crime novels include The Wheelman, The Blonde, and Severance Package (all from St. Martin's Press). He lives in Philadelphia.
Loading...
or
Not Currently Available for Direct Purchase