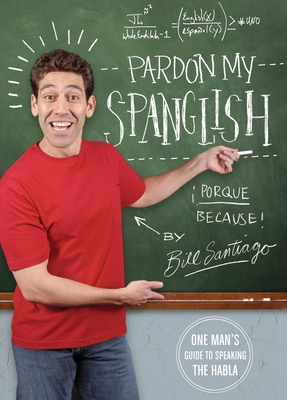 In Pardon My Spanglish, stand-up comedian Bill Santiago chronicles the quintessentially American alegrías of his mother tongue: the quirky, hilariously improvisational fusion of inglés and español spoken by millions (even if they don’t know or admit que están doing it). With crash-course efficiency, cada página de este libro empowers your every step toward Spanglish mastery. How can you not love Spanglish? Twice the vocabulary, half the grammar!

Readers will learn:
•  The outlaw syntax of Spanglish (as observed by a comedian with no formal training in linguistics whatsoever)
•  Advanced tricks of Spanglish conjugation (“to google”: Yo googleo, tú googleas, nosotros googleamos)
•  The Top 10 Best Things About Being Latino (#6: Guaranteed part in high school production of “West Side Story”)
•  Why “People en Español” should simply be called “Gente”
•  Handy corporate Spanglish phrases, including “Feliz hump day”
•  The secret Spanglish agenda of Dora the Explorer
•  ¡And mucho más!

Full of dead-on observations about immigration paniqueo, “oprima el dos” backlash, and every politically incorrect sentiment in between, Pardon My Spanglish is essential reading for Latinos—and the Latino-curious.

Bill Santiago is a native Spanglish speaker who became a stand-up comedian after narrowly escaping a career in journalism. With the premiere of his first special, Comedy Central Presents Bill Santiago, his mother finally stopped asking him to go to law school. He has appeared on The Late Show with Conan O’Brien, and his work has been published in the New York Times, Washington Post, Miami Herald, Los Angeles Times, Boston Herald, Philadelphia Inquirer, and San Juan Star. When not on stage, he enjoys curling up with a good book or a well-read, Spanglish-speaking woman. He lives in New York City.
Loading...
or
Not Currently Available for Direct Purchase