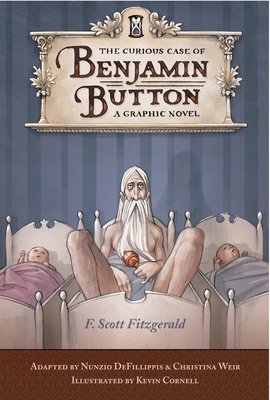 The Curious Case of Benjamin Button

Upon completing “The Curious Case of Benjamin Button” in 1922, F. Scott Fitzgerald declared it “the funniest story ever written” and “one of my two favorite stories.” It’s the strange tale of a man who is “born” 70 years old and mysteriously ages in reverse. This stunning graphic novel adaptation illustrates Benjamin Button’s many adventures: He falls in love, starts a family, and runs a successful business. In his later years, he goes to war and attends Harvard University. As an old man, he resembles a newborn baby and returns to the care of a nurse.

Complete with Fitzgerald’s original text, dazzling watercolor illustrations, and an afterword describing the story’s origins and critical reception, this edition offers a fresh look at a literary masterpiece.

F. Scott Fitzgerald is widely regarded as one of the twentieth century’s greatest writers. He was born in St. Paul, Minnesota, in 1896 and published his first novel, This Side of Paradise, in 1920. His other novels include The Beautiful and the Damned, The Great Gatsby, and Tender Is the Night. He died of a heart attack in 1940 at the age of forty-four.

Nunzio DeFilippis and Christina Weir are the authors of several original graphic novels, including Skinwalker, Three Strikes, Maria’s Wedding, and Past Lies (all from Oni Press). They’ve also worked extensively in superhero comics and have written for Wonder Woman, New X-Men, Adventures of Superman, and Hellions. They live in Los Angeles and also work in film and television.

Kevin Cornell is an illustrator and designer from Philadelphia, Pennsylvania. He maintains the Web Site www.bearskinrug.co.uk, which he frequently updates with sketches, comics, and mildly amusing prose. Although doctors confirm that he’s aging forward in a normal fashion, they agree his maturity level is still rather stunted.

A scholar, poet, and avid nature photographer, Donald Sheehy is a Professor of English at Edinboro University of Pennsylvania, where he teaches American literature and writing courses in the Department of English and Theatre Arts.  He has published extensively on the life and work of Robert Frost and is an editor of The Letters of Robert Frost, forthcoming from Harvard University Press.
Loading...
or
Not Currently Available for Direct Purchase