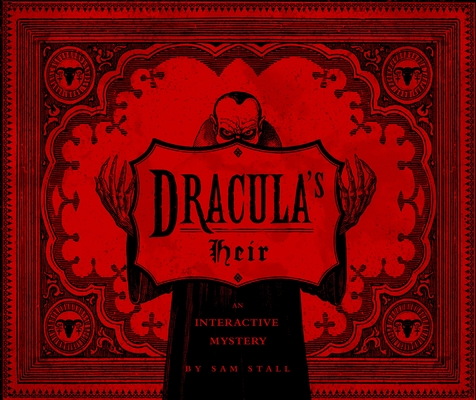 In 1897, Archibald Constable & Company published Bram Stoker’s Dracula, the most famous horror novel of all time. For reasons still debated by scholars, the first chapter of Dracula was cut from the book just weeks before publication. Here, it becomes the central clue in a spine-tingling original interactive mystery.

Dracula’s Heir begins 10 years after the horrific events described in the original novel. Jonathan and Mina Harker are happily married and enjoying life in Bixby, England. Meanwhile, their friend Dr. John Seward is tracking a string of crimes that seems eerily familiar: A 14-year-old girl sleepwalks out of her parents’ house and disappears into the night. Two “accident victims” are found drained of their blood, yet there is no crime scene evidence to explain its loss.

When Seward shares his discoveries with the famous vampire hunter Abraham Van Helsing, all the evidence points to Jonathan Harker. After all, Harker spent weeks imprisoned in Castle Dracula as a guest of the Count—was he infected without anyone realizing it? Has the mild-mannered English solicitor spent the last decade lurking in the shadows as a nosferatu? Or is someone (or something) else getting away with murder?

This chilling mystery novella features 8 removable clues, including a newspaper, a death certificate, Renfield’s private journal, and the original first chapter of Bram Stoker’s Dracula. When you think you’ve solved the crime, you can open the final signature (sealed at the printer) to test your powers of deduction.

Sam Stall is a writer in Indianapolis, Indiana.
Loading...
or
Not Currently Available for Direct Purchase