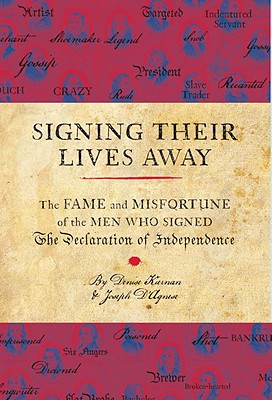 Signing Their Lives Away

In the summer of 1776, fifty-six men risked their lives and livelihood to defy King George III and sign the Declaration of Independence—yet how many of them do we actually remember? Signing Their Lives Away introduces readers to the eclectic group of statesmen, soldiers, slaveholders, and scoundrels who signed this historic document—and the many strange fates that awaited them. Some prospered and rose to the highest levels of United States government, while others had their homes and farms seized by British soldiers. Signer George Wythe was poisoned by his nephew; Button Gwinnett was killed in a duel; Robert Morris went to prison; Thomas Lynch was lost at sea; and of course Sam Adams achieved fame as a patriot/brewer. Complete with portraits of the signers as well as a facsimile of the Declaration of Independence, Signing Their Lives Away provides an entertaining and enlightening narrative for history buffs of all ages.

Praise For Signing Their Lives Away: The Fame and Misfortune of the Men Who Signed the Declaration of Independence…

“Kiernan and D’Agnese . . . succeed in stripping away preconceived notions of the more famous signers, and bringing out something of interest about the other, less well known ones.”—Library Journal

“Signing Their Lives Away is told in a brisk entertaining fashion.”—McClatchy Newspapers

Denise Kiernan is a journalist, producer, and the New York Times best-selling author of the narrative nonfiction books, The Last Castle and The Girls of Atomic City. Joseph D’Agnese is a journalist, author and ghostwriter who has written for both adults and children. With his wife, Denise Kiernan, he has authored several books on U.S. history, including Signing Their Lives Away, Signing Their Rights Away, and Stuff Every American Should Know. They live in North Carolina.
Loading...
or
Not Currently Available for Direct Purchase