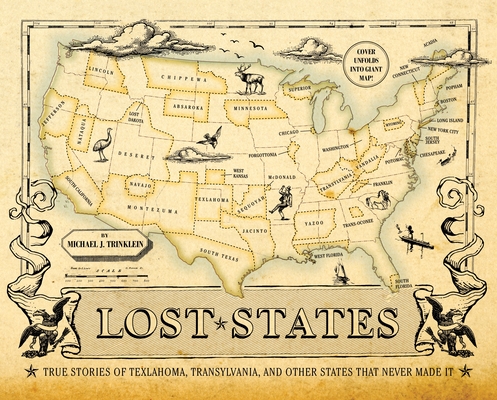 True Stories of Texlahoma, Transylvania, and Other States That Never Made It

This is American history they don’t teach you in class: Discover the “fascinating, funny” stories of the states that never were, from Texlahoma to West Florida (The New Yorker)

Everyone knows the fifty nifty united states—but what about the hundreds of other statehood proposals that never came to pass? Lost States is a tribute to such great unrealized dreams as West Florida, Texlahoma, Montezuma, Rough and Ready, and Yazoo. Some of these states came remarkably close to joining the Union. Others never had a chance. Many are still trying. Consider:

Frontier legend Daniel Boone once proposed a state of Transylvania in the Appalachian wilderness. His plan was resurrected a few years later with the new name of Kentucky.

Residents of bucolic South Jersey wanted to secede from their urban north Jersey neighbors and form the fifty-first state.

The Gold Rush territory of Nataqua could have made a fine state—but since no women were willing to live there, the settlers gave up and joined California.

Each story offers a fascinating glimpse at the nation we might have become—along with plenty of absurd characters, bureaucratic red tape, and political gamesmanship. Accompanying these tales are beautifully rendered maps detailing the proposed state boundaries, plus images of real-life artifacts and ephemera. Welcome to the world of Lost States!

Praise For Lost States: True Stories of Texlahoma, Transylvania, and Other States That Never Made It…

“We all know the 50 states, but how much do you know about the hundreds of statehood proposals that never came to pass? These fascinating maps of states that might have been are from Michael J. Trinklein’s Lost States: True Stories of Texlahoma, Transylvania, and Other States That Never Made It.”
—Country Magazine

“This book is geared to the general reader and has a larger format that encourages perusal. It is recommended for history, geography, and general trivia buffs.”
—Library Journal

“Complete with maps, Lost States is an interesting travel guide to the world of ‘what-if history.’”
—McClatchy Newspapers

"Trinklein is hilarious in his own right. I laughed out loud before I even got to the book’s main content ... it [covers] more states-that-never-were than any other source I've seen.”
—Jenny Bristol, GeekDad.com

Michael J. Trinklein wrote and produced the Emmy-nominated PBS documentary Pioneers of Television (2008), as well as The Gold Rush (1998) and The Oregon Trail (1993). His work has been consistently praised in the national media, including USA Today, Washington Post, Parade, Chicago Tribune, and the New York Times. He lives in Cedarburg, Wisconsin.
Loading...
or support indie stores by buying on
(This book is on backorder)