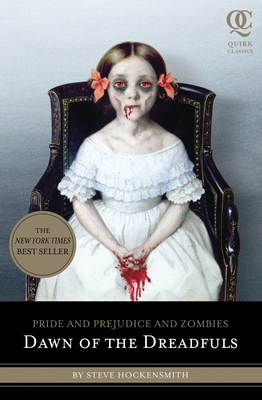 Pride and Prejudice and Zombies

Dawn of the Dreadfuls (Pride and Prej. and Zombies #1)

Complete with romance, action, comedy, and an army of shambling corpses, this prequel to the hit mash-up novel will have Jane Austen rolling in her grave—or crawling out of it!

Four years before the events of Pride and Prejudice and Zombies, the Bennet sisters are enjoying a peaceful life in the English countryside, reading, gardening, and daydreaming about future husbands—until a funeral at the local parish goes strangely and horribly awry. Suddenly, corpses are springing from the soft earth—and only one family can stop them. As the bodies pile up, Elizabeth Bennet grows from a naive young teenager into a savage slayer of the undead. Along the way, two men vie for her affections: Master Hawksworth is the powerful warrior who trains her to kill, while thoughtful Dr. Keckilpenny seeks to conquer the walking dead using science instead of strength. Will either man win the prize of Elizabeth’s heart? Or will their hearts be feasted upon by hordes of marauding zombies?

“Zombie-centric plot required to measure up to standards of both Austen and horror fans—no easy task. Now a New York Times Best Seller, the book seems to have struck a chord with both.”—Techland

“It’s a romp of a book.”—McClatchy Newspapers

“Mixing taught horror-movie action with neo-Austen meditation on identity, society, and romance, this happy sacrilege is sure to please fans of Grahame-Smith's original mash-up.”—Publishers Weekly

“This is a must-read for the growing legion of alternate-Austen fans.”—Booklist

Steve Hockensmith is an award-winning novelist and reporter. His debut mystery, Holmes on the Range, was a finalist for the Edgar, Shamus, and Anthony awards. Critics have hailed the novel and its sequels as “hilarious” (Entertainment Weekly), “dazzling” (The Boston Globe), “clever” (The New York Times), “uproarious” (Publisher’s Weekly), “wonderfully entertaining” (Booklist), and “quirky and original” (The Pittsburgh Post-Gazette). He lives in Alameda, California, with his wife and two children.
Loading...
or
Not Currently Available for Direct Purchase