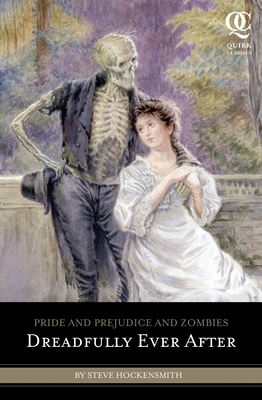 Pride and Prejudice and Zombies

Dreadfully Ever After (Pride and Prej. and Zombies #3)

Complete with romance, heartbreak, martial arts, cannibalism, and an army of shambling corpses, Dreadfully Ever After brings the story of Pride and Prejudice and Zombies to a thrilling conclusion.

When we last saw Elizabeth Bennet and Fitzwilliam Darcy—at the end of the New York Times best seller Pride and Prejudice and Zombies—they were preparing for a lifetime of wedded bliss. Yet the honeymoon has barely begun when poor Mr. Darcy is nipped by a rampaging dreadful. Elizabeth knows the only acceptable course of action is to promptly behead her husband (and then burn the corpse, just to be safe). But when she learns of a miracle antidote being developed in London, she realizes there may be one last chance to save her true love—and for everyone to live happily ever after.

“A masterpiece of parody and wit.”—Fangoria

“With the zombie Austen mashup mania showing no sign of abating, this is a must-read for fans and a must-buy for the libraries serving them.”—Booklist Online

“The further they get from Jane Austen, the better the zombie mash-up books become. Enter Dreadfully Ever After by Steve Hockensmith.”—McClatchy News Service

Steve Hockensmith is the author of the New York Times best seller Pride and Prejudice and Zombies: Dawn of the Dreadfuls and several other novels, including the Edgar Award nominee Holmes on the Range. Critics have hailed his books as “hilarious” (Entertainment Weekly), “dazzling” (The Boston Globe), “uproarious” (Publishers Weekly), “wonderfully entertaining” (Booklist), and “quirky and original” (The Pittsburgh Post-Gazette). He lives in Alameda, California, with his wife and two children.
Loading...
or support indie stores by buying on