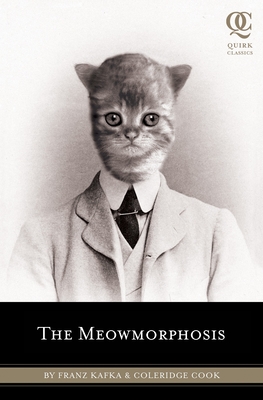 “One morning, as Gregor Samsa was waking up from anxious dreams, he discovered that he had been changed into an adorable kitten.”

Thus begins The Meowmorphosis—a bold, startling, and fuzzy-wuzzy new edition of Franz Kafka’s classic nightmare tale, from the publishers of Pride and Prejudice and Zombies! Meet Gregor Samsa, a humble young man who works as a fabric salesman to support his parents and sister. His life goes strangely awry when he wakes up late for work and finds that, inexplicably, he is now a man-sized baby kitten. His family freaks out: Yes, their son is OMG so cute, but what good is cute when there are bills piling up? And how can he expect them to serve him meals every day? If Gregor is to survive this bizarre, bewhiskered ordeal, he’ll have to achieve what he never could before—escape from his parents’ house. Complete with haunting illustrations and a provocative biographical exposé of Kafka’s own secret feline life, The Meowmorphosis will take you on a journey deep into the tortured soul of the domestic tabby.

Praise For The Meowmorphosis (Quirk Classics #3)…

“Highly recommended for connoisseurs of the bizarre.”—Publishers Weekly

Franz Kafka is one of the 20th century's most influential authors. His novella "The Metamorphosis" and his novels The Trial and The Castle are regarded among the most original works of modern Western literature. Coleridge Cook, writing under a different name, is a beloved fantasy novelist and blogger as well as the winner of several prestigious literary awards.