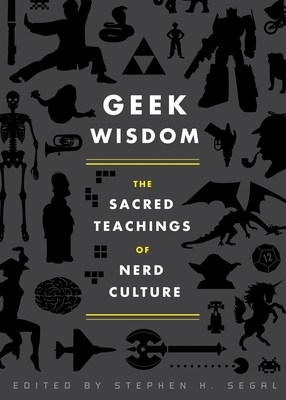 The Sacred Teachings of Nerd Culture

THE GEEKS HAVE INHERITED THE EARTH.

Computer nerds are our titans of industry; comic-book superheroes are our Hollywood idols; the Internet is our night on the town. Clearly, geeks know something about life in the 21st century that other folks don’t—something we all can learn from. Geek Wisdom takes as gospel some 200 of the most powerful and oft-cited quotes from movies (“Where we’re going, we don’t need roads”), television (“Now we know—and knowing is half the battle”), literature (“All that is gold does not glitter”), games, science, the Internet, and more. Now these beloved pearls of modern-day culture have been painstakingly interpreted by a diverse team of hardcore nerds with their imaginations turned up to 11. Yes, this collection of mini-essays is by, for, and about geeks—but it’s just so surprisingly profound, the rest of us would have to be dorks not to read it. So say we all.

Praise For Geek Wisdom: The Sacred Teachings of Nerd Culture…

“Geek Wisdom proves that insight needn’t come from dusty old tomes and the lips of long-dead philosophers. Maybe C-3P0 isn’t Socrates and The Superfriends aren’t a French Salon, but that doesn’t mean they don’t have anything to teach us.”—Suvudu.com

“Geek Wisdom: The Sacred Teaching of Nerd Culture is not only an invaluable guide into geekdom it's also indispensable if you have to go undercover and penetrate a secret geek society.”—Neatorama.com

“Any good story, religious or not, can be deconstructed to find an underlying message. That’s the unifying theme of Geek Wisdom, which treats pop culture as a form of secular religion, delivering insights on life from talking robots, flying dragons and everything in between.”—PopMatters

“Premise is nothing short of brilliant.”—Florida Times Union

Stephen H. Segal is the Hugo Award winning senior contributing editor to Weird Tales, the world’s oldest fantasy/sci-fi/horror magazine, and an editor at Quirk Books. His geek portfolio includes work for Tor Books, Viz Media, and WQED Pittsburgh, and Carnegie Mellon. A native of Atlantic City, he lives in Philadelphia.
Loading...
or
Not Currently Available for Direct Purchase