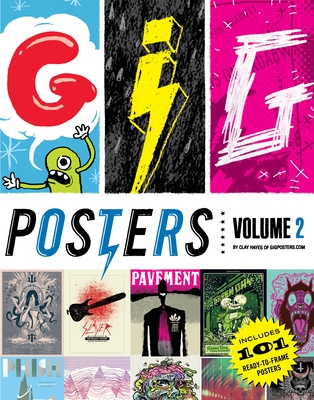 Readers gave the first Gig Posters anthology a standing ovation—so for your viewing pleasure, here’s one heck of an encore: 700 more incredible posters from the archives of GigPosters.com, the Internet’s premier destination for concert poster art. It’s a mad jam of illustration and photography, collage and typography, bringing the contemporary music scene to exciting visual life for a generation of fans who’ve grown up in the post-album-art era.

You’ll also find 101 perforated and ready-to-frame posters promoting the most dynamic musical acts of the twenty-first century, from the Black Keys, Flight of the Conchords, Ice-T, and My Morning Jacket to Norah Jones, the Avett Brothers, Coheed & Cambria, and many, many more.

It’s an awesome compendium of pop-art-history in the making—and it’s also just what the walls of your apartment or office have been waiting for.

Clay Hayes is the creator and proprietor of GigPosters.com. The website launched in 2001 and has grown to become the world’s largest historical archive of posters, with more than 100,000 works from thousands of designers. Visitors can browse and comment on gig posters, chat with fellow enthusiasts, purchase posters, upload their own creations, and more. To join the online community, visit GigPosters.com.
Loading...
or
Not Currently Available for Direct Purchase