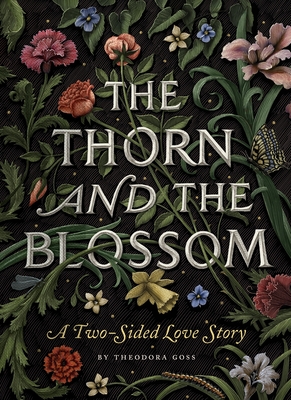 The Thorn and the Blossom

When Evelyn Morgan walked into the village bookstore, she didn’t know she would meet the love of her life. When Brendan Thorne handed her a medieval romance, he didn’t know it would change the course of his future. It was almost as if they were the cursed lovers in the old book itself . . .

The Thorn and the Blossom is a remarkable literary artifact: You can open the book in either direction to decide whether you’ll first read Brendan’s, or Evelyn’s account of the mysterious love affair. Choose a side, read it like a regular novel—and when you get to the end, you’ll find yourself at a whole new beginning.

Praise For The Thorn and the Blossom: A Two-Sided Love Story…

“It's a beautiful book, both inside and out, and truly a treasure on every appreciable level.”—Bookslut

“Goss has written some of the most remarkable short fantasy fiction of recent years.”—The Guardian (UK)

“Teens who enjoy a romantic tale will be enchanted by the clever packaging and the fanciful, touching story of young people thwarted in love.”—School Library Journal

“A book unlike any you've seen before.”—Westword

“Every page of The Thorn and the Blossom impressed me more and more until I finished and was just left with awe.”—Utopia State of Mind

Theodora Goss won the World Fantasy Award in 2008 for her short story “Singing of Mount Abora.” Her publications include the 2006 short-story collection In the Forest of Forgetting; Interfictions, a 2008 short-story anthology coedited with Delia Sherman; and Voices from Fairyland, a 2008 poetry anthology featuring critical essays and a selection of her own poems. She has been a finalist for the Nebula, Crawford, Locus, and Mythopoeic awards and has appeared on the Tiptree Award Honor List. Her work has repeatedly been showcased in “Year’s Best” anthologies. She lives in Boston, where she teaches literature and writing at Boston University.
Loading...
or
Not Currently Available for Direct Purchase