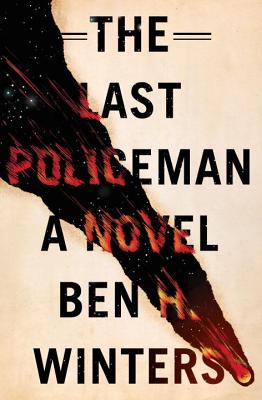 " The] weird, beautiful, unapologetically apocalyptic Last Policeman trilogy is one of my favorite mystery series."--John Green, author of The Fault in Our Stars and Paper Towns
Winner of the 2013 Edgar(R) Award Winner for Best Paperback Original
What's the point in solving murders if we're all going to die soon, anyway?
Detective Hank Palace has faced this question ever since asteroid 2011GV1 hovered into view. There's no chance left. No hope. Just six precious months until impact.
" "
"The Last Policeman "presents a fascinating portrait of a pre-apocalyptic United States. The economy spirals downward while crops rot in the fields. Churches and synagogues are packed. People all over the world are walking off the job--but not Hank Palace. He's investigating a death by hanging in a city that sees a dozen suicides every week--except this one feels suspicious, and Palace is the only cop who cares.
" "
The first in a trilogy, "The Last Policeman "offers a mystery set on the brink of an apocalypse. As Palace's investigation plays out under the shadow of 2011GV1, we're confronted by hard questions way beyond "whodunit." "What basis does civilization rest upon? What is life worth? What would any of us""do, what would we "really "do, if our days were numbered?


Praise For The Last Policeman…

“The best genre fiction holds a mirror up to society while also providing edge-of-the-seat excitement, and The Last Policeman did that and more.”—Las Vegas City Life

“I'm eager to read the other books, and expect that they’ll keep me as enthralled as the first one did.”—Mark Frauenfedler, Boing Boing

“...an entertaining and well-plotted tale.”—Wired.com's GeekDad

“I'm in the middle of it and can't put the dang thing down.”—USA Today's Pop Candy

“The Last Policeman succeeds both as a mystery, with a quirky detective and an intriguing whodunit, and as a piece of apocalyptic speculative fiction. That’s good news. The even better news is that this novel is supposed to be the first of a planned trilogy, with each case occurring closer to the moment when, as Henry repeatedly notes, ‘Bam!’ And that is something we can anticipate with a good feeling.”—Sacramento News & Review

“Winters is masterful in crafting a plausible image of a society that’s hanging onto sanity by its fingernails as it teeters on the edge of mass hysteria....This is a novel that grabs ahold of you and doesn’t let you go until the very end.”—The Nashua Telegraph

“If the next two books are as good as this one, I can't wait for the end of the world.”—Asbury Park Press

“...a solidly plotted whodunit with strong characters and excellent dialogue...This memorable tale is the first of a planned trilogy.”—Booklist

“This thought-provoking mystery should appeal to crime fiction aficionados who like an unusual setting and readers looking for a fresh take on apocalypse stories.”—Library Journal

“Ben Winters vividly describes the decline of civilization in this pre-apocalyptic story, and spins a wonderful tale...This engrossing story is the first in a planned trilogy. It is a well-written mystery that will have readers eagerly awaiting the second installment.”—NY Journal of Books

“The Last Policeman presents a fascinating portrait of a pre-apocalyptic United States.”—Tor.com

“Normally, only Stephen King and Dean Koontz can suck me into a book and not release their stranglehold until I, exhausted from lack of sleep, have turned the last page. Now [Ben Winters] has joined their ranks...The Last Policeman is extraordinary—as well as brilliant, surprising, and, considering the circumstances, oddly uplifting.”—Mystery Scene magazine

“Absolutely outstanding, I completely loved it from start to finish and I’m already rueing the fact that there will only be two more in the series...this gets the highest recommendation I can give. Buy it.”—In Search of the Classic Mystery Novel

“A promising kickoff to a planned trilogy. For Winters, the beauty is in the details rather than the plot’s grim main thrust.”—Kirkus Reviews, STARRED review

"New York Times "best-selling author Ben H. Winters won an Edgar Award for his debut mystery "The Last Policeman. "His YA novel "The Secret Life of Ms. Finkleman" was also nominated for an Edgar Award. He lives in Indianapolis with his wife and three children.
Loading...
or
Not Currently Available for Direct Purchase