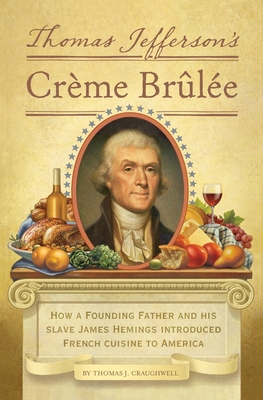 This culinary biography tells the incredible true story of how a Founding Father and his slave introduced French Cuisine to America—perfect for history buffs, foodies, and Francophiles alike

In 1784, Thomas Jefferson struck a deal with his slave, James Hemings. The Founding Father was traveling to Paris and wanted to bring James along “for a particular purpose”— to master the art of French cooking. In exchange for James’s cooperation, Jefferson would grant his freedom.

So began one of the strangest partnerships in United States history. As Hemings apprenticed under master French chefs, Jefferson studied the cultivation of French crops (especially grapes for wine-making) so they might be replicated in American agriculture. The two men returned home with such marvels as pasta, French fries, Champagne, macaroni and cheese, crème brûlée, and a host of other treats. This narrative history tells the story of their remarkable adventure—and even includes a few of their favorite recipes!

Praise For Thomas Jefferson's Creme Brulee: How a Founding Father and His Slave James Hemings Introduced French Cuisine to America…

“Like an enticing buffet, Thomas Jefferson's Crème Brulee brims with anecdotes ranging from a short history of French cooking to dining preferences of French kings, to the respective heat distribution properties of cast iron and copper.”
—American Spirit

“[a] well-researched look at the impact Jefferson and Hemings had on our eating habits.”
—Chicago Tribune

“Craughwell provides a delightful tour of 18th-century vineyards still in production, a look at French aristocrats just before the Revolution and the France that paid little attention to the color of a man’s skin...A slim but tasty addition to the long list of Jefferson’s accomplishments.”
—Kirkus Reviews

“Do you like French wine, fine dining, remarkable genius, and extraordinary human relationships? If so, check out Thomas Jefferson's Crème Brulee.”
—The Sun Herald

Thomas J. Craughwell is the author of several nonfiction books, including Stealing Lincoln’s Body, which was adapted into a documentary by the History Channel. He lives in Bethel, Connecticut.
Loading...
or
Not Currently Available for Direct Purchase