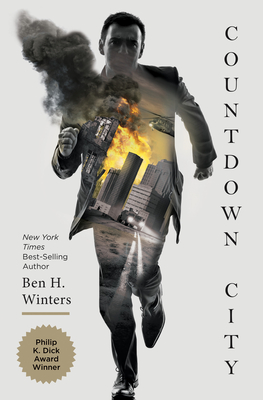 Detective Hank Palace returns in the second in the speculative mystery trilogy set on the brink of the apocalypse.

There are just 77 days before a deadly asteroid collides with Earth, and Detective Palace is out of a job. With the Concord police force operating under the auspices of the U.S. Justice Department, Hank's days of solving crimes are over...until a woman from his past begs for help finding her missing husband.

Brett Cavatone disappeared without a trace—an easy feat in a world with no phones, no cars, and no way to tell whether someone’s gone “bucket list” or just gone. With society falling to shambles, Hank pieces together what few clues he can, on a search that leads him from a college-campus-turned-anarchist-encampment to a crumbling coastal landscape where anti-immigrant militia fend off “impact zone” refugees.

Countdown City presents another fascinating mystery set on brink of an apocalypse--and once again, Hank Palace confronts questions way beyond "whodunit." What do we as human beings owe to one another? And what does it mean to be civilized when civilization is collapsing all around you?

“One of the best mysteries I’ve read in such a long time.”—Nancy Pearl, KUOW

“The ‘don’t lose hope’ ending is slam bang, setting us up for the ‘final-final’ installment.”—Florida Times-Union

“A precise, calendar-driven doom casts a shadow over the series, a planet-killer asteroid that the Earth can’t duck, making this an existential policier.”—The Sunbreak

“A thrilling and contagious read.”—Fayetteville Flyer

“Highly imaginative and also very plausible—it’s easy to think that the impending end of the world might feel very much like this. Genre mash-up master Winters is at it again.”—Booklist

“Through it all Palace remains a likeable hero for end times.”—PublishersWeekly.com

Do you think the author paints a convincing picture of Concord, New Hampshire, and of the world at large with only three months until the asteroid collides with Earth?

Now that the precise point of the asteroid’s impact has been announced, “impact zone” refugees are leaving their homes and flooding the United States. Would you take this chance and flee your country for the possibility of finding safety elsewhere?

When you learned of how the United States is handling the refugees, how did you react? Is it right to turn them away? Even if some of them are children?

As in The Last Policeman, people continue to abandon their jobs and disappear from their previous lives. Does it surprise you when Martha approaches Hank to find her husband?

Hank’s sister, Nico, continues to believe that the asteroid and information about its impact are part of a conspiracy. Do you think she is a credible character?

What do you think about the fact that Hank turns to his sister for help in his search for Brett Cavatone?

While searching for Brett, Hank and Nico visit an anarchist encampment to collect more information about Cavatone and his whereabouts. What did you think of the encampment’s security measures and justice system?

What is your reaction to the scene when Hank closes in on Brett Cavatone?

Given the collapse of law and order in the novel, do you think it’s OK for Hank and Brett to take extreme action if it will save lives?

If you knew there were only 77 days before an apocalypse would occur, what would your bucket list look like?