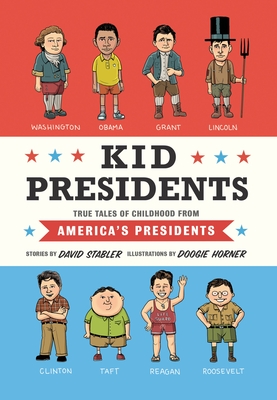 Every president started out as a kid! Forget the legends, tall tales, and historic achievements—before they were presidents, the future leaders of the United States had regular-kid problems just like you. John F. Kennedy hated his big brother. Lyndon Johnson pulled pranks in class. Barack Obama was bothered by bullies. And Bill Clinton was crazy clumsy (he once broke his leg jumping rope). Kid Presidents tells all of their stories and more with full-color cartoon illustrations on every page. History has never been this much fun!

“Just like history class, only hilarious.”—Tim Federle, author of Better Nate Than Ever

“A humorous peek into the early lives of our country’s leaders.”—Time for Kids

“Get the hilarious history of each president's childhood. Kid Presidents by David Stabler includes quirky illustrations and plenty of unusual trivia.”—Boys' Life

“Every leader of our country was once a kid, as the 20 true tales in this fun, fact-filled, whimsically illustrated book so cleverly remind us.”—American Profile

“With cartoonish illustrations that will attract fans of Jeff Kinney’s The Diary of a Wimpy Kid and Rachel Renée Russell’s The Dork Diaries, this informative offering leaves no presidential childhood rock unturned.”—School Library Journal

“The perfect gift for both presidential and history buffs, brimming with fun facts and full-color, comics-style artwork.”—Jennifer M. Brown, Shelf Awareness for Readers

“Caricatures by Horner are whimsical and funny, a good match for a book that demonstrates that every president started life as a goofy, regular kid.”—Booklist