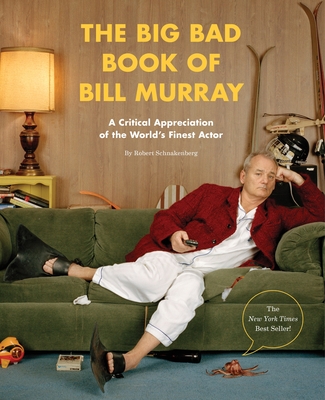 A Critical Appreciation of the World's Finest Actor

Part biography, part critical appreciation, part love letter, and all fun, this enormous full-color volume, packed with color film stills and behind-the-scenes photography, chronicles every Murray performance in loving detail, recounting all the milestones, legendary “Murray stories,” and controversies in the life of this enigmatic performer.

He’s played a deranged groundskeeper, a bellowing lounge singer, a paranormal exterminator, and a grouchy weatherman. He is William James “Bill” Murray, America’s greatest national treasure. From his childhood lugging golf bags at a country club to his first taste of success on Saturday Night Live, from his starring roles in Hollywood blockbusters to his reinvention as a hipster icon for the twenty-first century, The Big Bad Book of Bill Murray chronicles every aspect of his extraordinary life and career.

He’s the sort of actor who can do Hamlet and Charlie’s Angels in the same year. He shuns managers and agents, and he once agreed to voice the lead in Garfield because he mistakenly believed it was a Coen Brothers film. He’s famous for crashing house parties all over New York City—and if he keeps photobombing random strangers, he might just break the Internet.

Praise For The Big Bad Book of Bill Murray: A Critical Appreciation of the World's Finest Actor…

“The 271-page tome is an alphabetical guide to everything you ever wanted to know about the eccentric actor, and it's a pretty absorbing read even if you are ambivalent about Murray and his quirks.”—Washington Post

“Schnakenberg, a huge fan, does a great job of collecting some great snarky quotes and wacky trivia facts about one of America’s most beloved comedic actors.”—The New York Post

“Bill Murray is a riddle, wrapped in a mystery, inside an enigma—but the key is [The Big Bad Book of Bill Murray]”—Flavorwire

“The Big Bad Book of Bill Murray: A Critical Appreciation of The World's Finest Actor promises to be so enthralling, so rich with anecdotes and life-changing koans of wisdom, that literature as we know it may be separated into two distinct segments in the future: ‘Before BBBoBM’ and ‘After BBBoBM.’”—Thrillist

“For the guy who likes to think he’s the president of the Bill Murray fan club, this will be his most prized possession.”—Real Simple

“It’s perfect for the Murrayphile on your list and, let’s be honest, you have at least one of those.”—YAHOO! Movies

“Of all the coffee table books in all the world, this will be read the most.”—Brit + Co

“The Big Bad Book of Bill Murray is unquestionably as definitive as it gets. Read it to your friends at a party or read it by yourself in the bathroom. No matter how you approach Schnakenberg’s work, you will be both edified and regaled.”—Pop Matters

“Bill Murray is an American Treasure. With The Big Bad Book Of Bill Murray fans of all ages are treated to an encyclopedic examination of the actor, his roles, his co-stars and his odd antics.”—Alive

“If you’re a fan of the man… you’ve got to grab yourself a copy of The Big Bad Book of Billy Murray. Now.”—GeekDad

"For Murray fans, this appears to be the ultimate resource on the eccentric comic/actor.”—Bucks County Courier Times

“A comprehensive compendium on the life and career of the enigmatic and contradictory Bill Murray.”—Shelf Awareness

“The perfect gift for the Murray-phile...”—Monsters and Critics

“Fans of actor and comedian Bill Murray can revel in The Big Bad Book of Bill Murray by Robert Schnakenberg.”—Erie Times-News

Robert Schnakenberg has written more than a dozen books about American history and pop culture. His three favorite Bill Murray movies are Rushmore, Lost in Translation, and Garfield: A Tail of Two Kitties, but his favorite Bill Murray character is the host of Saturday Night Live’s ¿Quién Es Más Macho? For the record, he believes Ricardo Montalbán es más macho. He lives in New York City.
Loading...
or
Not Currently Available for Direct Purchase